0 Hayter and Calor are the Authority on Environmental Groundcare Solutions 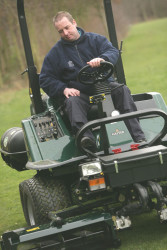 Local authorities and groundcare specialists can dramatically lower their carbon footprint for the benefit of all UK residents by simply switching their mowing equipment to run on Calor liquefied petroleum gas (LPG).

Calor, the UK's leading provider of LPG, has teamed up with premier mower manufacturer Hayter to offer a complete groundcare and amenity management solution for local authorities looking to minimise their impact on the environment.

Leicester City Council is just one local authority that is already enjoying the benefits of LPG powered equipment. Geoff Lake, Leicester City Council's Area Parks Manager - Parks Services, Regeneration and Culture, initially commissioned the hire of four LT324G LPG-fuelled mowers thanks to their green credentials and commercial capabilities. He says: "At Leicester City Council, it is our policy to ensure we use the most environmentally friendly and fuel efficient equipment as possible. We have used Hayter products for many years so it was naturally the first place we turned to when investigating opportunities to improve our groundcare equipment fleet."

Geoff approached Hayter dealer Mitchell Industries, based in Coalville, Leicestershire, who suggested a trial of the LPG-fuelled mower. After proving that it can easily cope with a full day's work without the need to refuel and demonstrating that it emits far fewer emissions than a diesel-powered mower the council agreed the contract to hire four LT324G models.

Geoff comments: "Additional benefits were soon very apparent: The LPG powered machines, in addition to their environmental friendliness, are exceedingly quiet and have dramatically reduced the number of noise complaints in residential areas. We can now confidently begin cutting earlier in the morning without disturbing the people we serve."

Mitchells' sales executive, Bryan Elverstone, says: "The LT324G, in addition to being quieter than diesel models, has more horsepower, is smoother in operation, can cope with the most demanding conditions and is most cost-effective since the savings in overall fuel costs are considerable - we have estimated a fuel saving of £3,000 on the four machines originally hired, making the pay back period very attractive." 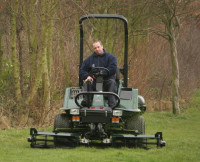 With Calor's extensive LPG delivery network, meaning closer proximity to customers than any other LPG company, it is the obvious fuel choice. Authorities using large amounts of LPG can also benefit from bulk supply with The Think Tank® telemetry system, which automatically notifies Calor when a delivery of LPG is required, reducing routine deliveries and in turn, the environmental impact of making deliveries.

Leicester City Council is so pleased with the performance of the LT324G mowers that a further two have been commissioned. Geoff says: "The mowers have been very well received by our work force which has found them very productive, flexible and most importantly comfortable for operators to use, thanks to its low vibration levels."

Derek Boulton, managing director of Hayter says: ""The environmental benefits offered by the Hayter LT324G combined with the credentials of Calor LPG are an excellent way for local authorities to cut their carbon emissions simply by switching to LPG mowers."

Concluding, Jeff Penfold of Calor said: "The development of LPG technology in groundcare has gained momentum over the last decade - the case for Calor LPG has never been better."