0 Hayter out in force at Saltex

Hayter out in force at Saltex 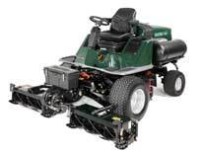 Being shown for the first time at Saltex was the LT324G four wheel drive triple mower. Developed from the highly successful diesel powered LT324, the new machine uses LPG and will satisfy the current demand for environmentally friendly grass cutting machinery.

Outwardly similar to the LT324, with the new engine cover redesign and other styling changes made to give the machine a more aesthetically pleasing appearance, the LT324G has all the benefits associated with Hayter ride on products. These include a comfortable operating position, hinged or removable panels for easy access to all components for maintenance and common parts across the range wherever practical. The obvious visible difference between the LT324 and the new machine is the two LPG tanks, one on either side of the engine behind the operator. These carry enough fuel to operate at full load for 10 hours of continuous cutting, more than will ever be required on the most demanding grass cutting rounds. The power unit fitted is a 4 cylinder 1600 cc engine built by General Motors. This develops 40 hp at normal operating speed and ensures the machine has more than enough power to cope with demanding applications and yet is quiet and smooth in operation. Those operators who have already used the machine have been impressed with its performance and have commented how comfortable it is to operate. The LT324G will be available in early 2005.

David Sturges, Sales and Marketing Director for Hayter commented. "It is exciting having the LT324G in the Hayter range. We are enthused with its potential and the benefits to the operator and productivity. We see this product forming a major part of the Hayter range."

A new three deck rotary was shown by Hayter for the first time at Saltex this year. Designated the R324T, this machine is developed from the R314 and has a wider cutting width, larger engine and also incorporates the new styling which will eventually be common throughout the range.

With an increase in cutting width of 0.5 metres making it 3.5 metres and a 60 hp turbo charged Kubota diesel engine, this new machine has a significantly higher output than its predecessor and is powerful enough to cope with the most difficult grass conditions. Although designed for demanding municipal applications, the R324T also has the ability to leave a well manicured finish where necessary, particularly on golf course rough and semi rough where this type of machine is increasingly being used. Despite the increase in its size, the R324T is highly manoeuvrable and can operate in areas with confined access. As has come to be expected from Hayter products, particular attention has been paid to making a comfortable operating position and access to all components for servicing is as easy as it can be. The new R324T will replace the R314 and will be available in early 2005.

David Sturges, Sales and Marketing Director for Hayter said. "The three deck rotary is a versatile machine that can cope with a wide variety of applications. Our customers appreciate what this type of product is capable of and have a requirement for a more powerful, higher output model than the existing machine. In the R324T we believe that demand will be satisfied but the manoeuvrability of the machine will enable it to work just as easily in areas where the R314 was used previously."