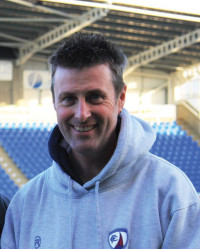 The 2012-2013 season is well and truly underway, and League Two Chesterfield Football Club is aiming to emulate the success of its 2010-2011 season, which was one of celebration for the Spireites. Not only did the club gain promotion to League One and move from its historic Saltergate ground to the brand new B2net stadium, but its Head Groundsman was named League Two Groundsman of the Year by the Football League - as well as claiming the coveted Overall Groundsman of the Year, beating off competition from the Premiership, the Championship and League One.

Anthony Haywood joined his beloved Chesterfield Football Club over twenty-five years ago as an apprentice football player. Although he did not make the professional team, his passion for the club led him to join the grounds team on a Youth Training Scheme (YTS). Since then, Anthony has worked his way up from apprentice to Head Groundsman and has now been rewarded for his hard work and dedication with these latest accolades.

"I joined Chesterfield Football Club straight from school and, although I did not make it as a professional footballer, I have been fortunate enough to train and work with some very talented groundsmen. This hands-on experience has undoubtedly helped me in my career and ultimately in winning Groundsman of the Year in 2011," explains Anthony. "It was a fantastic achievement to be presented with both of these awards and receiving recognition from the industry for what we have accomplished at the club. It was also well deserved, in my opinion, especially after all the work the team put in creating the new pitch at the B2net stadium."

The new 10,300 capacity stadium was handed over to Anthony and his colleagues, Steve Fearne and Steve Wilburn, in July 2010, giving them a window of only seven weeks from seeding the pitch to the team's first pre-season friendly.

"The turnaround of the new pitch was extremely tight, and it is testament to the hard work of the grounds team, which consists of only two full-time workers and one part-time, that we were able to achieve it as well as maintaining the quality of the surface throughout the season," continues Anthony.

"When deciding what pitch to put down in the new stadium, we researched every option possible to find the best fit for our needs. Due to an expected high level of intensive use, we required a surface that was hard wearing, yet safe and comfortable for the team to play on - because of this we chose a Fibresand pitch."

Fibresand is a unique polypropylene fibre reinforced silica sand that is incorporated into rootzones in order to provide extra stability to the surface. When integrated into a rootzone, the fibres act as a mass of indestructible synthetic grass roots, reinforcing and stabilising the growing medium and producing a tighter, more divot resistant surface.

At the same time, Chesterfield's training facility was being entirely renovated and, due to time constraints, was not completed in time for the team to start training. The club was given use of pitches at Sheffield University, however the players preferred to train at the stadium on the new Fibresand pitch.

"During the 2010-2011 season the pitch saw thirty-eight professional games and forty-three training sessions, as well as over thirty 'community' games where the pitch was loaned out for various functions," adds Anthony. "Training on the stadium pitch is not ideal, but it demonstrates the players' preference for the pitch surface, and it withstood this sustained use whilst maintaining its stability. It also demonstrates the level of skill of the grounds team who have kept the pitch in top condition - and it needed to be, to withstand the rigours of testing for the Groundsman of the Year Awards!"

The Football League Groundsman of the Year Awards are handed out by the Playing Surfaces Committee, which is helped in the judging process by the Football League. It is designed to recognise the importance of quality pitches and acknowledge the work of head groundsmen and their staff.

The awards are initially determined using marks from referees and away managers, which are then followed by detailed pitch inspections and a review of management operations. These pitch visits usually take place in late March and early April.

"The judges had very exacting standards and were extremely thorough in their examination of the pitch. They also asked a number of questions about the products we used, our routines and how we prepared for a new season," says Anthony.

The other League winners included Ewan Hunter of Nottingham Forest, who was awarded the Groundsman of the Year for the Championship; Carlisle United's David Mitchell, was presented with the award for League One Groundsman of the Year; and Tommy Doherty of St. Mirren Football Club was recognised for his grounds work in the Scottish League.

"It was a great honour to be presented with this award, especially as it was a particularly bad year for all groundsmen with inclement weather conditions across the country," explains Tommy Doherty, Head Groundsman at St. Mirren. "Despite this weather our pitch, which is also Fibresand, has remained consistent and played extremely well throughout the whole season."

Mark Robinson, former Head Groundsman at Derby County and now Sports Turf Manager at Mansfield Sand, comments, "Winning Overall Groundsman of the Year was an excellent achievement for Anthony and his team, as well as for all the other winners of the Groundsman of the Year awards. It is also a fantastic time for Mansfield Sand, as three out of the four winners - Nottingham Forest in the Championship; Carlisle in League One; Chesterfield; and St. Mirren in the Scottish League - all have Fibresand pitches.

"These awards are obviously down to the hard work and dedication of the grounds teams. However, we hope the raw materials used also helped to contribute in some way to the success achieved by each clubs."

Just the tip of the spire

Anthony is understandably proud of his and his teams' achievements. "We are a small club, with only three grounds staff, one mower, one fertiliser spreader and one lining machine, but we are all extremely dedicated to what we do to achieving the best surface we can, for both the club and the supporters."

"I am obviously delighted to have been presented with these awards and for the recognition, but it is a team effort and a tribute to all those who help and support me throughout the season," concludes Anthony.