When people think of hazards on a golf course, they generally think of bunkers and water. But hazards come in all shapes and sizes and can be used in different ways. Here, Tim Lobb of Thomson Perrett & Lobb, explains what makes good hazards and where to put them
Hazards have created some remarkable and historic moments in golf. Who can forget the image of Jean Van de Velde stood hands on hips, shin deep in the Barry Burn at Carnoustie at The Open Championship in 1999, trying to figure out if he could play an escape shot from the rising water?

Then, at the other extreme, there's Sandy Lyle's famous 7-iron approach from the fairway bunker at Augusta's 18th, setting up a memorable Masters victory in 1988.

Hazards can be iconic features of golf courses and can be natural, like the Barry Burn, or designed, like Augusta's fairway bunkers. But hazards should always do one thing - make the golfer think and prompt them to form a strategy to play the hole. Golf courses that demand this sort of thought and planning often make better, more interesting, courses.

Of course, hazards don't just penalise golfers for their bad shots, they play tricks on golfers' minds, deceiving their eyes. Fairway bunkers 30 yards short of a green often result in many approach shots coming up short because the golfer has visualised the green being just beyond the bunker when there is in fact a stretch of 'dead' ground that needs to be carried.

Natural land movement can be a hazard in itself as land separation or a mound creates something for the golfer to consider. The Old Course at St Andrews is a great example of how natural hazards come into play. On the second hole you have a blind approach to the green, as there is a natural mound which obscures the putting surface from view. 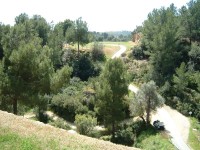 Then, there's the legendary Valley of Sin around the 18th green, a deep depression, which is ready to swallow up any approach shots left short. I really like the Valley of Sin for its simplicity and guile - it is really effective in making the golfer think about the shot, which is what the best hazards need to do.

Natural hazards are often better than man-made ones, but either can be incorporated into a course. When we look at designing a course we take a detailed look at the natural terrain and see if it can be turned into a hazard. Sometimes, we'll even design a complete hole around it.

At our latest project, at New Giza in Egypt, we are making perfect use of the natural surroundings to bring hazards into play. The course, which is in view of the Pyramids, is set out in a disused quarry with dramatic cliffs. We have been able to incorporate the old quarry wall into our design, using it as a 'natural' hazard.

You might not think of a wall running down the edge of a hole as a hazard, but there is no doubt that it will certainly make you think as you stand on the tee - the last thing you will want to do is ricochet a ball off it.

While a quarry wall is an obvious hazard, there are surreptitious hazards dotted around many golf courses, the most common of which is simply the cut of the grass.

The recent US Open at Torrey Pines was a prime example of using long grass as a hazard. Letting the rough grow very long can be extremely penal, as trying to get out of thick vegetation is much tougher than escaping most bunkers. Some people say this is unfair, but my friend and partner, five-times British Open Champion Peter Thomson, always used to say that he would figure out where the trouble was on a golf course and then make sure he avoided it.

Of course, there are some hazards around the world that aren't seen as hazards at all, but more iconic symbols of the course itself.

Take Portugal's Penha Longa, for example. This course has an ancient Roman aqueduct running across it and, while it is a fascinating sight, it is still a hazard because it does what we want all hazards to do - play tricks on your mind. Having marvelled at it, when you line up your shot you will be wary that you don't hit the aqueduct or get stuck behind it.

One of the most famous, of course, and one of my favourites, is the Old Course Hotel at St Andrews. Before the hotel was built, there used to be railway sheds poking out into the line of play from the tee. The hotel is now on this site and a single storey wing has replaced the old sheds, so golfers cutting the corner or looking for the right side of the fairway, which is the ideal angle from which to approach the green, still have to play over the building. It's an exciting and daunting drive requiring great thought, yet seems to perfectly complement the course's natural hazards that have been there 600 years.