0 He's a huge fan! 7ft 1in Wimbledon worker poses with celebrities and players 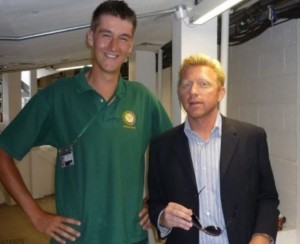 Each year, the standard of staff at Wimbledon really does reach new heights.

Take this 7ft groundsman for example - who has been a real hit with celebrities and players.

Giant Lydon Sutcliffe, 26, is constantly accosted for photos by celebrities due to his larger than average frame.

Mr Sutcliffe, who spends six months of the year preparing the courts for the competition, has met over 30 stars since starting at Wimbledon in 2009.

The groundsman says they all ask him the same thing - 'What's the weather like up there?'

He added: 'Celebrities just spot me in the crowd and come over and ask for a picture with "the tallest man in Wimbledon".

'They also say "can I just ask..." and before they have finished speaking, I reply "7ft 1in." They say "how did you know what I was going to ask?"

'It amazes me because everyone asks the same things. I often get the usual 'gosh, you're tall aren't you?' and then there's the classics like 'did your mother put you in a grow bag?'

'I've heard them all countless times but I still find it funny.

'A lot of people ask me if I play tennis when they see how tall I am. I tell them "no, I play miniature golf" and they seem to find that quite funny.

'Over the years I've met so many famous people and it's always so easy to chat to them because right away we have a topic of conversation - my height.' 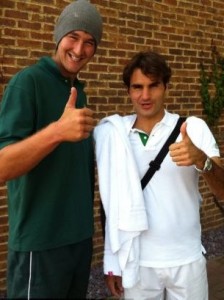 Mr Sutcliffe, from Lancaster, added: 'I love meeting all different kinds of people and it's great to talk to any celebrity but my favourites are athletes.

'I absolutely love sport and I have so much respect for people who play professionally.

'No matter what sport it is, I know I'm so lucky to be able to stand and chat with them, especially because most of them actually approach me.

'I'm quite friendly with a few of the tennis players now. Roger Federer always asks to have a photo with me and John Isner, who played the longest professional tennis match in 2010, always chats to me, as we are both into wrestling.

'Last time, he left me his size 14 trainers, which fit me perfectly.'