Glamorgan are now without two senior staff after announcing the retirement of head groundsman Len Smith.

Although Glamorgan have not commented on Fatkin's departure, they have now issued a statement saying an amicable agreement had been reached with Smith.

Both men have been key to preparing the Cardiff ground for the Test.

"On Monday Len Smith informed the club, both orally and in writing, that he wished to explore the possibility of taking early retirement," Glamorgan's statement said on Wednesday. 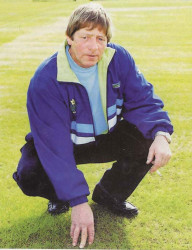 "Following discussions between Len Smith and his departmental manager, the club has reached an amicable agreement with Len.

"Yesterday was Len's last day of employment with Glamorgan Cricket."

Smith had been with the club for over 20 years, and the statement paid tribute to his "long and loyal" service and skills, saying he had won a prestigious groundsman of the year award in 2007.

They added his expertise had been one of the major factors in the England and Wales Cricket Board (ECB) deciding to bring the Ashes Test to the Swalec Stadium.

"At the end of the season, and in conjunction with the ECB, we shall be conducting the search for a new head groundsman," Glamorgan's statement continued.