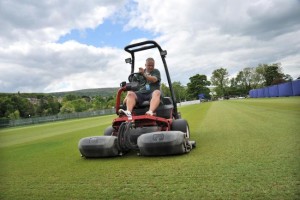 After the previous winter, during which the club grounds were flooded three times, Richard Lord has had the opposite problem this winter.

The head groundsman at Ilkley Lawn Tennis & Squash Club, who is preparing the courts for the Aegon Ilkley Trophy from June 17-25, explained at the tournament's press day: "The water during the worst flood was only a foot below the middle rail on the back-tier grass courts.

"It was about 3ft high, but without the three floods things were a lot better last winter.

"It was a very dry winter, so it was a lot easier to do stuff on the grass.

"If the winter is not too dry, we can still get on and keep them cut and do other stuff, but spring has been a bit dry, which hasn't helped the growing.

"We had that early spell of warm weather and it started to grow, but then it got cold and dropped everything back, but now we seem to be picking up nicely.

"The recent rain was a big blessing as it was getting too dry."

Lord, who is helped during the winter by his assistant Will Rigg, who was appointed last autumn, said that there was the option of taking water from the adjacent River Wharfe, but that nothing can beat rain.

He explained: "The rain was a blessing because when we want to irrigate with water from the river it is during the day and you are putting it on when it is warm.

"Then it just evaporates straight away and doesn't have a good chance to soak in, so rain is the perfect product for it really."

Lord added: "I am happy with the courts at the moment. They are nice and thick and nice and green."

Fertiliser and weedkiller has been applied since last Wednesday's press day just to get rid of those last weeds and be ready for the tournament.

If youwould like to view the original article please visit HERE.