2 Head Groundsmen working with the Media

Head Groundsmen urged to use the media to raise profession's profile 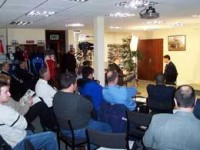 Hosted and sponsored by Europe's biggest tractor manufacturer, Same Deutz-Fahr at its UK Headquarters in Rugby, Warwickshire, the event also received sponsorship from Allett Mowers, Boughton Turf Management Systems, The Monro Group - Sports Division, Rigby Taylor and SISIS. Its aim was to give Head Groundsmen from venues that host major sporting events, the knowledge and experience needed to participate in television and radio interviews. 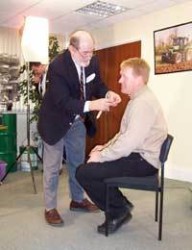 The training was provided by Jack Saltman, a former Producer and Director of 'Panorama' for the BBC and later in his career, Editor of 'This Week' for Thames Television, who directed and produced many well known personalities including Sir David Frost, Jeremy Paxman and Steve Ryder.

He spent the morning session discussing how proactively seeking opportunities to speak to the broadcast media could help to raise the profile of Groundsmanship as a profession, a crucial step towards Groundsmen receiving greater recognition for their contribution to top-flight sport. 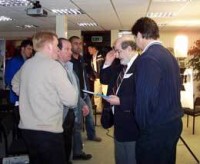 Stuart Kerrison, Head Groundsman at Essex County Cricket Club and Chairman of the First Class cricket Head Groundsman's group commented: "The event was a great success. It has given those who attended the confidence and skills required to handle interviews with both the broadcast and print media. With the intense media coverage our sports receive, we think it's important that Head Groundsmen are capable of getting their views across in a competent and professional manner. In the near future, I hope we'll have the opportunity to give our expert opinion regarding pitch matters on both TV and radio."

Pitchcare and the ECB would like to thank all our sponsors who made the day possible.