by Rosie Duckworth
in Industry News, Rugby, and Cricket
on 08 Aug 2013 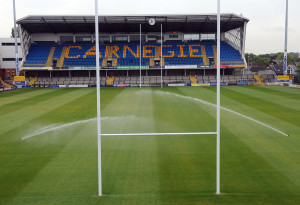 Lely's Toro Irrigation national sales manager Robert Jackson believes this makes it the most significant and advanced stadium irrigation installation in the UK to date.

As he comments: "It's fantastic to see Headingley Carnegie recognise the important role irrigation plays in maintaining a pitch to the highest standards. Many sports clubs opt for state-of-the-art Toro sprinklers, but then settle for a basic wallmount system that applies water in minutes rather than millimetres, which is costly and not conducive to efficient, sustainable pitch maintenance.

The new pitch construction began in October 2012 and was completed earlier this summer, with the combination of under-soil heating and irrigation ensuring that the turf successfully established within just five weeks.

Jason and his team have been reaping the benefits of the system since its handover and he says that the club is delighted to become the first stadium in the UK to use this advanced new system.

"As a club, we feel that, if we're going to do it, we're going to do it right - we don't want to cut corners," he reveals. "We really needed a good irrigation system now that we're playing all year round rugby here because you can't keep the turf alive and playable without it. I've been all over the UK and Europe researching the new pitch construction for the last eight years, and I was just blown away by the Toro system."

Jason was keen to go with Toro Irrigation in the knowledge that it is used by many of the world's top golf clubs. "Irrigation is essential to golf courses and so it's no coincidence that the forerunners in golf have Toro - it's the best name in irrigation, in my opinion.

I'm very surprised we're the only stadium to have this particular system. I have a lot of friends at top stadiums and, when you see what they're spending on their pitches, you wonder why they don't have this. What's on the surface is directly influenced by what's underneath and you need all the information this system offers to make the best possible decisions."

Jason and his team will be using Lynx, which provides detailed, comprehensive information on all aspects of the pitch and its irrigation programme, to manage the pitch as sustainably as possible. As he continues:"This is a brand new construction, so we're starting with a blank sheet of paper. But we are monitoring water, energy and other inputs this year, with the intention of assessing that data next year and then introducing a more sustainable way to manage the pitch in year three."

But the benefits of the system are already becoming apparent. "This system has so many 'get out of jail free cards' - as I like to call them! - in terms of managing and saving resources.

For example, if it rains, the weather station rain sensor adjusts the watering automatically, whereas before, if we'd set the system to water 3mm and it then rained 3mm, we couldn't do anything unless we were there to adjust the irrigation in person. On top of that, we're able to access the system remotely - from elsewhere in the stadium, from home or anywhere, using a computer or smartphone."

But, the system's performance aside, Jason says that there was another crucial factor in choosing Toro. "I looked briefly at other systems, but I knew that if Toro had what I wanted I would always go with them," he concludes. "And that's also because I'm a real stickler for aftersales service. I can be very vociferous and if something's not right then I'll shout about it! But I'm only shouting positives things now. The system and the service are both fantastic!"