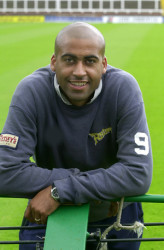 Following improvements in surface drainage, Pugh-Lewis will return to the Headingley Carnegie Stadium in Leeds for the third time this August to Sand Master the entire, 80-year-old main pitch.

Jason Booth, who has been Head Groundsman since 2001 blames the underground heating system, which was installed over 40 years ago, for recent problems. "We've got nine miles of electric cable between four and six inches down which was probably used to heat the pitch half a dozen to a dozen times a year," he explains. "Over time the cable had baked a layer of subsoil two inches above and two inches below, which was stopping surface water reaching the drains. We could only verti-drain or spike to a limited depth and as the winters became warmer and wetter we decided to
disconnect the cables all together."

Having dispensed with the danger from the old heating system, Jason and his team verti-drained to a depth of 10 inches, which slightly improved the situation but was not sufficient.

"We're home to both the Leeds Rhinos who play Rugby League and Super League, and the Leeds Tykes who play in the Guinness Premiership which is Rugby Union," Jason continues. "As Rugby League and Rugby Union overlap at both ends of the season we're left with a three week renovation window. We needed extra drainage but had to keep surface disruption to a minimum, working within such a limited timescale."

Sand Mastering, installing sand bands with a Blec Sandmaster at 250mm spacings seemed a viable option and Chesterfield based Pugh-Lewis treated 2,0000 sq metres of the wettest area of the pitch in August 2004. "Working 7 to 8 inches down the machine just sliced through the cables creating little disruption to the surface," Jason remembers. "Following treatment, this area on the South side proved to be drier than the rest of the pitch, so we got the company back in August last year to do the whole surface. The results were remarkable, so we booked them again for this summer."

For further information on the Sand Mastering services offered by J Pugh-Lewis, contact the company on Tel: 01773 872362 or visit their website at: www.pugh-lewis.co.uk