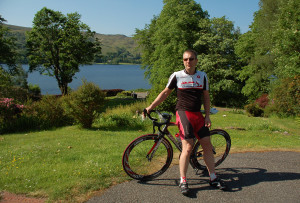 Raising funds for both The Alzheimer's Society and Parkinson's UK, which his Father in Law suffers from, Alex has just completed the Fred Whitton Challenge on May 12th this year. The challenge was to cover 112 miles over pretty much all of the major mountain passes of the Lake District. Of the 1700 riders that started out more than 400 failed to finish, but Alex managed to knock 1 hour 16 minutes off his best time. "Despite very cold conditions and heavy rain for the last 60 miles," Alex said, "I managed to gain a 1st Class Time Award".

Not content with doing that, he now intends to take part in the Prudential Ride, London-Surrey 100, on Sunday 4th August 2013. The 100 miles is on closed roads, much of which was used for the Olympics Road Race last year, and will start at the Olympic Village. Alex again, "It is billed as one of the largest fund-raising events in the country with 20,000 people taking part out of 70,000 applicants".

All in all Alex has raised more than £6K in the past for his two causes.

A range of Headland products can be seen in the Pitchcare shop.