0 Health and Safety Minister Lord Freud is urging a common sense approach to clearing snow from footpaths and pavements. 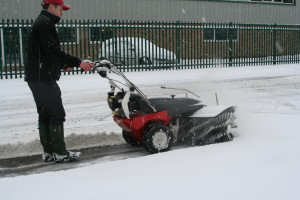 Health and Safety Minister Lord Freud is urging a common sense approach to clearing snow from footpaths and pavements.

As people across the UK brace themselves for the first arctic blast of the season, Health and Safety Minister Lord Freud is urging a common sense approach to clearing snow from footpaths and pavements.

There are no health and safety regulations that prevent people from clearing snow at their home, their business or at their neighbours' homes, despite newspaper stories in previous winters to the contrary.

Now ministers want to pre-empt the usual health and safety myths ahead of the first snowfall that could prevent people from doing a good deed to help stop others falling and injuring themselves on a path or pavement.

People need to be aware that they will not be reprimanded for doing a good deed by clearing ice and snow. The truth is very simple: you can clear ice and snow from footpaths and pavements but always be careful that you don't put yourself in danger.

Countless lives have been saved and injuries prevented because of robust health and safety practices. But bogus excuses give real safety laws a bad name and stop people from taking action.

The government has put together guidance so people are aware of the facts, including practical tips online for anyone clearing snow.

It forms part of the government's drive to debunk health and safety myths, with members of the public being encouraged to report potty excuses masquerading as health and safety to the Health and Safety Executive's (HSE) Myth Busters Challenge Panel

The panel has busted 336 myths since it was launched in April 2012.

Chair of the Health and Safety Executive Judith Hackitt said:

Anyone can clear ice and snow from public spaces, so don't be put off because you're afraid someone will get injured. Remember, people walking on snow and ice have a responsibility to themselves to be careful.

Find out more about clearing snow from a road, path or cycleway on following link: Snow clearing health and safety myth shattered