by Val Graham
in Battery/Electric Power, Machinery & Mechanics, and Golf
on 28 Sep 2022 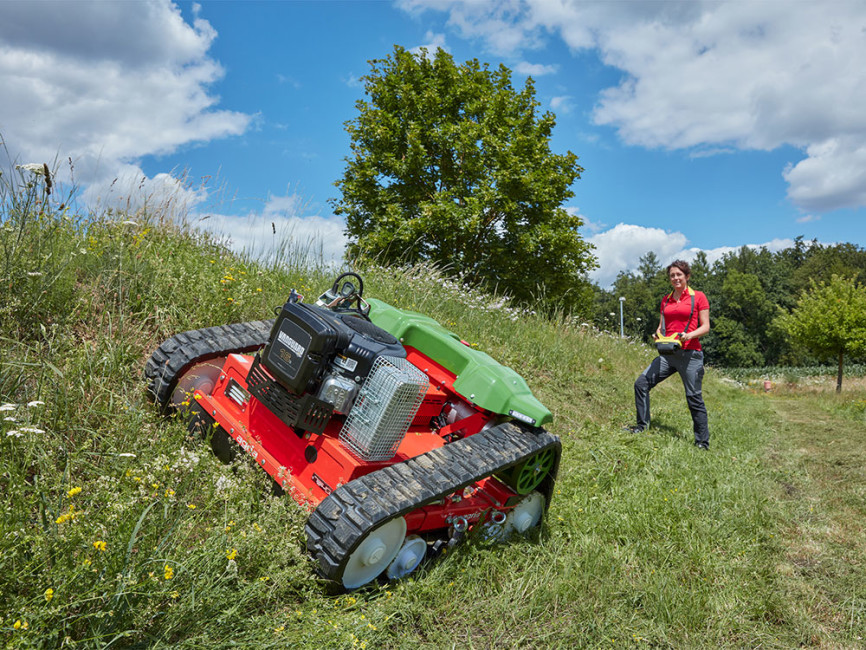 "The Agria is an unusual and distinctive piece of equipment. I saw something remarkably similar a few years ago in Portugal, which reminded me of a tank, and I thought, that's the future. It is great; they go anywhere, do anything. You don't have trips, falls or vibration worries. Your team is safely positioned on the flat up to 100 metres away. It really is the way forward," he said.

Scottish Borders Council has opted for the 70 cm version agria 9500. With brushless motors and electromechanical breaking it takes manoeuvrability to a new level, literally on to banks and hilly areas up to 45 degrees. Operated with a handheld control pad and joystick it has a hybrid power system which helps to minimise fuel use.

"Primarily we'll be using ours anywhere that's on a slope, so high banking at a housing estate, a park or cemetery, or in a town centre. Instantly they reduce risk for our operating team. It works equally well on the flat, too, but our focus until the end of the season is cutting high areas and making them more presentable."

"Handover training for three of our operators and one from the mechanics team was very thorough and helpful," continued Kenneth Naylor.

"We'll see the season out with it and then bring it back out next year when grass needs to be cut again. We've been told if we need more operators trained or if a refresher is needed, then just to get in touch, that's the sort of support we want from a dealer.

"There is a wider version, but we chose the 70 cm version because it can fit into the back of a van without a trailer. Knowing we have an Agria in the fleet just removes some of the worries about H&S."

"The 70 cm agria comes with a powerful 16 hp Briggs & Stratton engine and mows wild growth effortlessly, leaving a clean even finish. The caterpillar tracks help locate and tame visible areas which for Kenneth's team would have been previously unreachable.