5 Hectic summer at the City of Manchester Stadium

Hectic summer at the City of Manchester Stadium 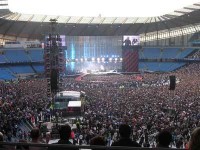 Since the end of the 'concert season' in July, getting the pitch to its present level has been something of a challenge to us all here at City to say the least! Five concerts, almost 300,000 people through the turnstiles, around 130,000 of whom were on the pitch-marvellous! The fact that our staff end of season party was held in mid-July said it all about the clubs ongoing ability to hold high profile events all year round.

Following the concerts the pitch was scarified for the third time this summer with the Koro field topmaker, going around 10mm down into the rootzone-the majority of the renovation work was done by Mallinsons. 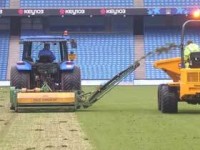 The pitch reacted well to the Supatrac flooring that covered the pitch and held its grass cover much better than we could have expected. As well as the Koro, we raked the pitch 3 times with a grass rake in different directions to stand up the Desso Grassmaster fibres that were getting laid flat in the algae on the rootzone surface.

The pitch was also vertidrained using 12mm tines and reseeded with 11 x 25kgs of Bar7, using both a disc and dimple seeder.

It was also fertilised with a liquid feed of 18-3-6 and Amino Sorb F from Rigby Taylor. As well as this, what was the second in a planned three stage application of Activate R granules were also applied, the first application was applied in late May. We have been using this to encourage better root growth over the course of a stressful summer for the grass sward at the stadium.

After the renovation, this is what we were left with, and just four weeks to the first game…

Following all this, the stage end was quite bare due to the aluminium trackway that had been on the area for the concerts, so we put our light rig on this area for a week. The results of using the rig were again, amazing. Seed in the area where the lights were germinated in just over three days, with the rest of the new seed following three days later.

Fortunately during the renovation, and indeed for most of the summer, the weather has thankfully been on our side, something we were always hoping for, and something we will all be hoping will continue. Regular cutting with our Toro rotary mowers was carried out for the next couple of weeks before we started to use the Mastiff to firm up the surface in readiness for the first game, which at this stage was just two weeks away-also 13 x 14-2-7 was applied to the pitch. As I mentioned earlier we do have an algae problem, so towards the end of July, 68 bags of Profile Greens were applied over the whole area via a pedestrian spreader. A couple of days later the pitch was refertilised, again with 18-3-6 and also Amino Form R. 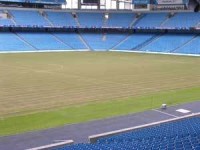 With just over a week to the first game the grass stared to 'yellow off' quite a bit as Leafspot decided to pay us a visit, this was quickly remedied with an application of Chipco Green from Aitkens Sportsturf. On the Monday before the game, there was still cause for concern over the colour of the pitch, so it was decided the best way to put it right once and for all was to put 21 bags of 12-0-9 on the pitch, with the consideration that cutting had to be done daily without fail due to the high nitrogen content and the amount of bags applied, it was inevitable that growth would be at a premium!

The first game was a friendly against Olympiakos, the Greek champions. By now the pitch had established a uniform green colour, and the pitch was cut, marked and ready for play. We did our initial marking a few days earlier to give the new grass as much time as possible to establish before being covered in paint, I currently use Supastadia AF from Supaturf, and apply via a wheel to wheel transfer marker. The pitch played ok considering it was just four weeks since the renovation work was completed. It was also a time to play around with the pattern; our previous manager was particular over cutting only width and lengthways, though our current manager hasn't expressed a preference so 'corner to corner' was todays pattern. Unfortunately two days later was the team photo at the stadium so the team trained here for two hours as well as the reserves.

The north goal had took a bit of a battering due to the stage being at this end and when we told the manager he took the team down the south end of the pitch and the north penalty area was untouched for the whole of the session-it may have swayed him that we took the goals down at this end as well…! 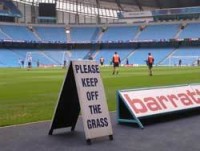 One thing we did know to expect was the scraping down the middle by Chris Kirkland, the visiting keeper, we had remembered him from a previous visit whilst playing for Liverpool.There was improvement in how the pitch played, though it still seemed a bit soft-all our cutting with the Mastiff has been done with the seat on to try to firm the pitch up and help keep the levels intact until the new grass roots sufficiently to be able to withstand a game properly.

Following the game, we had a two week break, so an application of Breaker Triple wetting agent was put on to reduce the moisture build up in the morning, and also a carbohydrate feed with Scotts Greenmaster Blade.

Leading up to our next game, Portsmouth, the pitch was sorrel spiked using the Dennis G760 and a 20 bag application of Profile Greens was applied-this is to be a regular thing now to try to counteract the algae. The Portsmouth game did see a big improvement in how the pitch played, the chemical treatments, two week break between games and the fantastic weather at this time was all coming together and improving the way the pitch was playing. The pitch was cut in a tartan pattern, making the most of no objections from the manager. 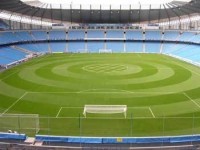 Cutting in different ways will also help the sward to tiller and thicken up, and as Southampton aren't in the Premiership this season, someone has be different in the way they cut, don't they?!?!? (Only kidding Dave!) As the weather gets cooler the pitch will take a more 'normal' look in the way it is cut though.

The following Monday, the pitch was solid tined using 16mm tines on the Toro Multicore machine, overseeded with two bags of Bar7 across the pitch where required and the final application of Activate R granules was applied. All the while regular cutting was ongoing. Last week the pitch was brushed in two directions with the Dennis, removing ten boxes of unwanted material, ready for the 'Rigby Taylor Cocktail'. This was an application of liquid products-15-0-10 at half rate, Liquid Magnesium, K-Sorb, Cal-Sorb, Amino Form R and Magnet-the big plus of the Mascot range of liquids is that 90% of the products can be tankmixed, reducing the need for multiple applications via the tractor mounted boom sprayer.

As I write it is raining outside-a rare occasion for most of the summer-and it is 'Derby Day in Manchester with City making the short trip across town into Trafford, so we have no game until next Sunday, which is televised against Bolton.

The three week break in games at the stadium has been ideal to help the pitch strengthen up that bit more. With the added problem of being on my own due to my assistant Gary Conway breaking a couple of bones in his leg and ankle in early July, it has shown the strength in depth we are fortunate to have here as whenever I have needed a hand with something, be it first team games, routine maintenance work, or reserve team games next door, the other members of the groundstaff, including club Head Groundsman Roy Rigby and the staff from Carrington, have been only too happy to come over and help out without hesitation, a bonus of being a well run department only too willing to help each other out.

Good luck for the season, and lets hope the temperatures continue as they have done (a little more sun would be nice though!) 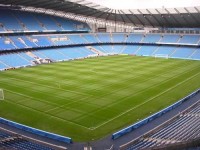