Does your golf course or grounds abut a residential property? If so, is the boundary defined by a tall conifer or semi-evergreen hedge? 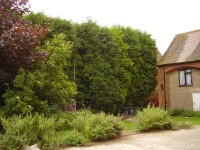 Whilst the hedge may serve as a screen, or some other purpose, have you thought about the potential effect its presence could be having on your neighbour's enjoyment of their property and/or garden, for example by casting excessive shade for a large part of the day?

Have you spoken to the neighbour about the hedge to ensure that they are happy with it? Have they complained to you about any detriment the hedge is having on their property?

Since the 1st June 2005 Local Authorities have had powers to deal with complaints about high hedges which are having an adverse effect on a neighbour's enjoyment of his or her property.

These powers are conferred on authorities under Part 8 (High Hedges) of the Anti-social Behaviour Act 2003, and were introduced following responses received to a consultation paper 'High Hedges: possible solutions' in 1999. The majority of respondents to this paper favoured a complaints system provided that it was used as a last resort and neighbours had made every effort to resolve the issue amicably with the hedge owner before submitting a complaint.

Basically, an aggrieved neighbour may make a complaint to his Council on the grounds that the reasonable enjoyment of his property is being adversely affected by the height of an adjacent high hedge (the legislation states where it is a 'barrier to light or access') and if the following criteria are met:

• They are the owner or occupier of a domestic property.

• The hedge is on neighbouring land that is owned by someone else.

• The hedge is formed wholly or predominantly by a line of two or more evergreen or semi-evergreen trees or shrubs.

• The height of the hedge is more than two metres tall, (measured from the ground level on which it grows).

The Office of the Deputy Prime Minister (ODPM) provides guidance in its booklet 'High Hedge Complaints: Prevention and Cure' (May 2005) on how to administer and determine complaints and in 'Hedge height and light loss' (March 2004) how to calculate the appropriate height of a hedge in varying situations and orientations to a property.

There is no requirement to formally register a complaint and there are no set time limits for determining a complaint (the ODPM in his leaflet 'High Hedges: complaining to the Council' states that complainants should not expect an answer for at least twelve weeks).

Complaints may be made against loss of light to garden or property or both. The ODPM provides formulae and guidance for working out the appropriate height of a hedge in certain situations.

Different calculations are required to be made in respect of the effects a hedge may be having on either a garden or property. Where a complaint is made in respect of light loss to both property and garden and the calculated heights differ (based on a set of measuring formulae, e.g. length of garden, orientation of hedge) the lower of the two is taken. If this measurement is lower than the current height of the hedge then the Council may serve a Remedial Notice on the owner, under section 69 of the Act, requiring a reduction of the hedge to the calculated height. 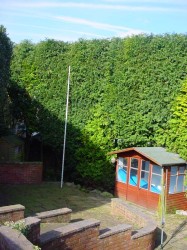 The remedial notice must specify the hedge it relates to, what action is required to be taken in relation to the hedge in order to remedy the adverse effect (Initial Action) and by when, what further action (Preventative Action), if any, is required to prevent recurrence of the adverse effect, what date the notice takes effect and the consequences of failure to comply with the requirements of the notice. The action specified in a remedial notice may not involve reducing the height of the hedge to below two metres, or its removal.

Whilst the remedial notice remains in force, there is an obligation on the local authority to register it as a local land charge. In addition, the notice is binding not only on whoever is the owner or occupier of the land on which the hedge stands at the time it is issued but also on their successors.

The notice remains in force until the hedge is removed or dies, or the notice is withdrawn, for example where the affected property ceases to be used for domestic purposes and the notice no longer has any practical effect.

Appeals can be made to the Planning Inspectorate in the following instances and by the said persons:

• Against the issue of a remedial notice by: a) the complainant where he thinks the works specified aren't sufficient and b) the owner of the hedge where he thinks a notice should not have been served, thinks the requirements go to far and/or not enough time has been given to complete the works.

• Against the non issue of a remedial notice, by the complainant (or his successor) only, where he thinks the Council have got it wrong or the Council agreed the hedge is causing a problem but did not serve a notice.

• Against the withdrawal of a remedial notice, by the complainant (or his successor) only, where there was no agreement to the withdrawal, a new notice has not been issued or nothing has altered sufficient to warrant withdrawal.