Fescue (Festuca rubra ssp.) and Colonial Bent (Agrostis capillaris) grasses are so entwined in our golfing history I doubt that the game would have been possible, or indeed grown, without them. The hardy, low growing, dense, springy sward produced by fescue growing on our linksland gave support to, and shaped, the game. Golfers would have followed the routes of least resistance through the dunes, playing over the fescue, bent "mown" by the grazing animals.

This "tight" sward, combined with the prevailing winds, shaped the shot making of the time. Even when the game moved inland its practitioners sought out sites that were free draining, supporting fescues and bents, such as heath and downlands.

Golf is a game best played on grass but not just any grass, the finest possible grass, and this is fescue. The early exponents of the game, and its greenkeepers, knew and appreciated this. Sadly, to a large extent, it has been a lesson lost.

Golf greens are the ultimate playing/putting surface. In my opinion, fescue and, to a lesser extent, fescue/bent swards provide the ultimate grass for those playing surfaces. Why then have we lost so many of our fescue/bent dominated greens. The answer to this is not short as there have been many factors, however, they all form part of golf greenkeeping history and thus the history of the game itself.

The boom in popularity of golf in the early seventies, stimulated by live colour television coverage of tournament golf, is the main marker for the start in decline of fescue/bent dominated greens. Simply, the game became aerial, and played on colour, the colour of course being green, the darker and more uniform the better. Of course previously, golf had been a game played closer to the turf, the skilled exponent of the chip and run having the advantage. This skill was dictated by the firm, dry, fast turf provided by fescue/bent.

Now, thanks to television and in particular the satellite signal, we see the ball being lofted into greens from a great height and stopping dead on softer irrigated 'green' surfaces. This is the game that the new 'moneyed' golfer of the seventies wanted to play, the game of the touring professional.

The growth in the game's participants put money into the UK's golf clubs, a large proportion of which became available to the head greenkeeper, who had previously been used to getting by on nothing much. This, in large part, thanks to his undemanding fescue dominated sward.

To ensure that a club and its head greenkeeper could be parted from their funds, irrigation, machinery and fertiliser manufacturers, closely followed by chemical companies, flooded the market. These tools to make a greenkeepers life easier only, as it turned out, made them harder and more complex.

Many of the inland courses, with greens constructed on local pushed-up soils, suffered badly with fertiliser and water over-use combined with compaction from higher numbers of rounds. This, in turn, had a detrimental effect on the fescue/bent grasses. Compacted, highly fertile, anaerobic soils were opposite to the conditions that fescue/bent grasses thrived in. Poa annua took hold in these situations and a vicious cycle of decline set in further with the production of thatch and associated turf grass diseases. Where once the occasional spot of fusarium and cortisium were seen in spring or autumn, fusarium outbreaks became rife. Clubs with smaller incomes or clued up canny 'links' men in charge, avoided the decline but, it has to be said, these were in the minority. 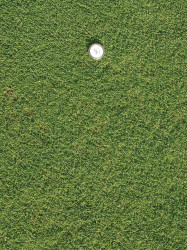 During the late seventies and early eighties many head greenkeepers and course managers set about trying to rectify the problems. To this day very few have ever succeeded in returning these green surfaces to pure fescue/bent, let alone pure fescue. Some often compounded the problem by using 60/40 fen soil based topdressings. These dressings, due to their high proportion of fines and organic matter, sealed the surfaces further.

Golf committees also compounded problems by going through a number of 'headmen'. This meant changing topdressing regimes that only succeeded in layering the surface 50mm with a strata of differing materials, thus introducing differing air and water movement rates. These strata also caused root shearing. Therefore, the keen fescue/bent green surfaces that our country was known for, were lost, replaced by poorly performing annual meadow grass dominated surfaces. This is a situation that many are still endeavouring to rectify today.

So, what of the future for bent/fescue swards?

Other than on the remotes of links courses, will we ever see fescue dominated putting surfaces again? The R&A's initiatives, in relation to "best course for golf", are focused on returning green surfaces to our traditional native sward. The STRI's golf agronomy focus is also only on this. In all of their report recommendations, when working with anything other than creeping bent grass, fescue/bent is the target. Peer groups like the Gingerbread Men have this as their ultimate goal. Other devoted course managers see that there is only one true greenkeeping direction, namely fescue/bent. More power to them all I say, but will they win out?

Unfortunately, due to commercial pressures, an obsession with lower heights of cut to gain speed, soil push-up greens, and all their inherent problems, coupled with the sheer pressure of going through a species conversion the answer is often "no".

This is not a defeatist opinion, more one of realist thinking gained out of experience.

The routes to gaining, or reverting back to, a fescue/bent dominated sward are well documented by the R&A, and their agronomists the STRI. Also, the work carried out by course managers in Denmark, and of course by Jim Arthur, is legend. Therefore, there is little point in me detailing them here. What I will do, if you are aiming at providing the best golf green surfaces possible, is list your options for quick reference. You can then decide the best route for your club and course: 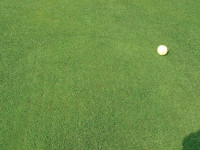 Rebuilding two or three greens at a time is often undertaken by clubs, starting with the 'wet' or 'difficult' greens. The problem with this option is that the course manager is left managing two differing surfaces for years to come. Worse still is that the members and visitors have to play on them.

Route 2
Surface strip and re-sow, utilising a machine like the Koro Top Fieldmaker, ameliorating in a pre-specified sand, re-contouring and overseeding with fescue or fescue/bent.

This route is a great method to achieving results quickly with the minimum of disturbance, (if you think tearing up all your greens in August is a minimal thing to do). At around £25,000 for 19 greens it is relatively cheap. As ever, there are drawbacks - even if you have convinced the powers that be that they will only lose the back end of the year! The problem with this method is that your are not changing your drainage or rootzone makeup. If you have old, local soil greens this is one of the main causes of your problem and the loss of fescue to annual meadow grass.

Cost: Negligible difference to normal operating budget, indeed may even be savings if you have been heavy on water, fertiliser and fungicides in the past.

This route disturbs play and finance the least, however this means that it also disturbs your existing old soils, Poa annua, Ryegrass and Yorkshire Fog the least!

I believe that there are so few clubs that can afford or be willing to undertake options 1 and 2, that option 3 remains the route of choice for the majority. This, in turn means that, at best, five and, more likely, seven to ten years of mixed quality surfaces. This route also has a high failure rate due to the departure of the main drivers for change on the committee or in course management.

In the majority, Route 3 is the adopted course for species conversion as it is easiest and cheapest to implement and has the added bonus of not being completed before "I am off the committee" or "left my job"!

For me, many clubs do not assess the situation in a business like manner, often failing to weigh up the conversion options open to them. Then, in turn, not fully estimating the financial implications of what they are undertaking. Clubs are often guided by their course manager and agronomists, who's involvement and influence in the decision making process is based purely on agronomic or 'best practice' reasoning. This often has little to do with 'best business practice' reasoning.

When considering species conversion to fescue/bent in golf greens, golf club management should evaluate the following factors on a cost versus return basis.

2) Length of time taken to reach this potential. In other words, when will we have pure fescue, fescue/bent greens, and at what cost

3) Cost of ensuring we retain pure fescue, fescue/bent greens in the future

4) Cost of implement options 1, 2 and 3, including losses of income due to any closures

So, here am I discussing business and commercial considerations in relation to the oldest grass surface in golf - fescue, the grass that was there well before any commercial interest in the game. It is unavoidable however as success and thus the commercialisation of the game is the very reason for the decline of the king of cool season golf grasses. 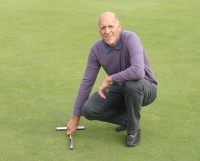 Over the last three articles I have discussed the three main grasses for golf greens. All have their place in the game, and all, I am sure, will continue to play their part. However, all have to be able to thrive in the environment that they are expected to perform in.

All, due to the higher expectations of the games participants, also have to have long-term commercial viability. This is because, when three men go to mow these surfaces, they are not going to mow a meadow!