Defra, the Scottish Government and Welsh Assembly Government have launched the second phase of the Be Plant Wise campaign to raise awareness of the damage caused by invasive aquatic plants at a time when pond owners may be thinking about tidying their ponds ready for winter.

The release of just a tiny fragment of plant can establish a population that can choke an entire waterway, causing damage to the natural environment and costing the economy millions. The problem can be heightened at this time of year when gardeners may unknowingly assist the spread of harmful plants by disposing of unwanted pond plants inappropriately. By ensuring unwanted plants are composted properly and waste pond water is disposed of carefully away from streams, rivers, ponds or lakes, gardeners can help protect the environment and save the nation money.

Launching the second phase of the campaign, Environment Minister Richard Benyon said: "It's important we raise awareness and encourage pond owners to be more plant wise at this time of year when they are starting to think about tidying their ponds. Many retailers are already taking steps to ensure people know what they're buying and advising customers on how to dispose of unwanted pond waste properly.

"Making sure that ponds and rivers are cleared properly has real benefits to our natural environment. The continued eradication of water fern in the Lancaster Canal, near Preston, has led to improved oxygen levels and increasing numbers of fish allowing otters to survive and they have now been spotted here for what 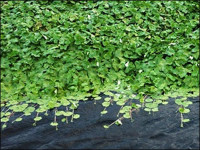 is believed to be the first time. We must prevent the spread of these plants so that our rivers and wildlife can thrive and remain a safe and enjoyable place to visit."

The Be Plant Wise campaign highlights five of the worst offending invasive aquatic plants that are threatening our wildlife and waterways. Plants such as floating pennywort, New Zealand pigmyweed, water-primrose, parrot's feather and water fern can be found in your garden pond. Parrot's feather is now adapting to the UK winters by becoming more frost resistant and water fern can readily colonise areas of freshwater, growing at great speed, doubling in size every two to three days.

Floating Pennywort is being found at an increasing number of sites in north-east London, near the Olympic site along the River Lee and the River Roding, and also on the River Wandle in south west London. It is the most expensive of all aquatic weeds to control and the Environment Agency estimate they spent £510,260 on controlling approximately 300 km of it in 2009. It spreads quickly in spring and summer when it dominates the surface of the water, often covering it completely and blocking out oxygen and light for the flora and fauna beneath.

Pond owners are advised to: 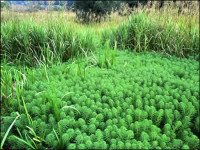 • Compost with care - make sure you dispose of the whole plant properly and no fragments break away; dispose of waste pond and fish tank water away from streams, rivers, ponds or lakes;

• Stop the spread - be careful not to introduce invasive species into the wild, even accidentally, as you could be breaking the law; and

• Know what you grow - pick the right plants for your pond and manage them carefully. Choose non-invasive species where possible.