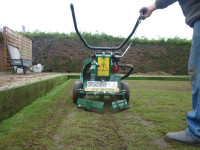 "It wasn't long before I recognised that, without the knowledge, no amount of enthusiasm would be enough to turn it around. I needed help - and badly!"
Tom Rigby, Chairman, Woodford-cum-Membris Bowls Club

When the snow finally relented at the end of January, I anxiously peered through the club gates at what consecutive harsh winters had done to our green. It wasn't a pretty sight, and my heart sank.

I had become chairman of Woodford-cum-Membris Bowls Club in November 2010, a small club of around forty members, of all ages and abilities, in the village of Woodford Halse in rural Northamptonshire.

The club was founded in 1994, the result of an arrangement between the Parish Council and a small group of keen bowlers from the local community. It's a club which has been built almost entirely on the enthusiasm, dedication and determination of its members and the support of its friends.

But, in recent years, this enthusiasm and determination had dwindled through a lack of funds, lack of knowledge and lack of willing and able volunteers. When I took over the reins, the green was showing signs of this neglect and, so, with a head filled with ideas, and enough enthusiasm to sink a battleship, I threw myself into it. It wasn't long before I recognised that, without the knowledge, no amount of enthusiasm would be enough to turn it around. I needed help - and badly!

Desperate for guidance, I typed 'lawn bowls greenkeeping' into Google. Only 288,000 results, all of which professed to be the holy grail of greens maintenance. So I added 'forum', and up popped Pitchcare. Well into the small hours, I read through the greenkeeping calendar, furiously making notes as I did so. Two hours and twenty pages later I was really still none the wiser and even more desperate for some help. So, more out of hope than any kind of conviction, I left a message.

I went for some supper and returned an hour later to find half a dozen replies - all positive and encouraging. By the next morning I had almost thirty responses. One of these was from Ken Barber who, judging by what others were saying, was a highly respected greenkeeper. Ken lived locally and offered to come and have a look at our green. We met a few days later, on 27th January, and, after a lengthy period of sighs, tuts and shakes of his head, he told me that it was the worst green he'd ever seen, but that he fancied a challenge.

Ken takes up the story: "Tom told me that approximately three tonnes of dressing had been applied in 2010 but, judging by the 30mm depth of thatch, I would suggest t 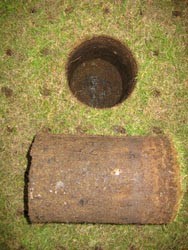 hat it was less than that, since thatch dilution from these dressings was barely noticeable. The grass species appeared mainly to be fescue with some bents and the occasional small spot of poa annua. Thankfully, the fertiliser programme had also been kept to a minimum, so at least we were working with the right types of finer grasses."

"Almost every end, on almost every rink, in both directions, was either devoid of grass or close to it. What was left of the scarification it underwent in the previous autumn were deep scores around 20mm in depth."

On removing a small core sample, Ken pointed out that there was obviously very little evidence of cultural practices being implemented in recent years and, as a result, there was no longer a healthy, balanced environment for fine grasses to grow.

We took a plug core sample which showed a darker layer of soil directly below the thatch, which we soon realised was the original turf layer, laid in 1994. The next surprise was the depth of the rootzone (175mm), and the method used as a choker layer between the rootzone and the underlying drainage stone - a weed barrier type membrane which prevented the rootzone from migrating down into the stone drainage. We soon discovered that this was a method commonly used during the 1980s and 90s in order to cut costs.

"Exactly how efficient a semi-permeable membrane is, is hard to tell. In all probability, it will gradually clog up with fine particles that naturally migrate down through the rootzone over time. This will only increase its water-retention capabilities and create black layer or other anaerobic conditions. There is no easy solution to a green built in this way, other than to punch holes through the membrane using a verti-drain or similar deep aeration tool, and hope that it won't cause rootzone migration into the stone drainage in later years." 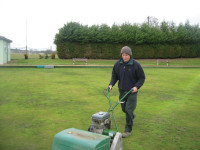 It was quickly decided that severe dry-patches, which covered around 30% of the green, had been caused by an excessive thatch layer and grass roots predominating the upper rootzone. "Dry patch is the stressing of the grass plant due to the lack of water intake. This can be caused by any one or a combination of reasons - a general lack of available moisture, humps and ridges preventing surface entry of moisture, excessive nutrients in the surface rootzone and spells of long, hot, dry weather."

"However, in most situations where fine turf is involved, dry-patch is normally associated with a hydrophobic condition. Some say that it's caused by soil fungi, others say it's due to the decomposition of organic matter coating each individual soil particle with waxy substances, preventing each particle from re-wetting. Once it occurs, it's quite difficult to reverse, and rectifying it often involves the use of high quality wetting agents and the introduction of beneficial micro-organisms which will break it down."

Armed with this information, Ken and I discussed a way forward, a plan that would eventually see the green return to its former glory. First off, it needed cutting from its current 20mm to a height of 10mm, so we could get a closer look at what we were dealing with. A friend and cricket groundsman, Paul Shrimpton, and I worked late into the evening going over the green twice.

Still monitoring the Pitchcare message board, I was contacted by Andy Johnson, Head Groundsman at the Blue Coat School in Edgbaston. Much to my amazement he offered to drive the fifty or so miles on a Saturday morning, sacrificing an afternoon of beer and England's first Six Nations match, trailing his verti-drain and mini-tractor behind him. The morning was spent by myself, Ken (complete with hernia) and several volunteers armed with snow shovels, following Andy on his tractor, removing the 120mm cores that his 8mm hollow tines had made at 40mm intervals. In my mind the green had started to look better already!

A few days later I was contacted by Dean Broughton, a turfcare contractor of some twenty-five years, who offered (again, free of charge) to travel down from north Leicestershire with his Groundsman 345 (a very good machine, K 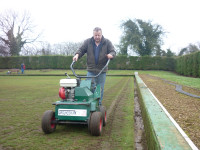 en tells me), fitted with 6mm hollow tines set at 30mm square spacing and penetrating to a depth of 90mm. Dean, a straight-talking, larger than life character, made light work of the tining and then left his machine to help us sweep up the small cores.

These simple treatments have already made a marked difference to the green. Where there is grass, it is greener and, where previously surface water would pool, it now drains away deep into the soil. With one or two applications of ferrous sulphate and regular and varied forms of aeration, the moss and thatch has also started to break down.

Ken again: "Those of you who know me and my wafflings from the message board, may be aware that I'm an organic man at heart and strive to use products that either stimulate or encourage the soil food web (living micro-organisms, including beneficial fungi, bacteria, protozoa and nematodes). For the most part, I've been working closely with Alan Sharp of Symbio, who I believe are the UK leaders in terms of products and back-up support."

"Having read the posts on the Pitchcare message board, Alan contacted me and suggested that, free of charge, he would supply the club with a full programme for the forthcoming season, including organic fertilisers, bacterial additive products to reduce thatch and other plant stimulants that would benefit and help proliferate the soil food web. He felt that the lack of cultural practices, and the lack of fertiliser and any chemical input, provided a blank canvas to work with and an ideal opportunity for his programme to prove itself." 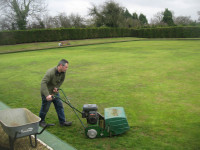 Both Ken and I have been truly amazed, and somewhat humbled, by the response from members on the Pitchcare message board, and the spirit and generosity shown by those who have travelled many miles at their own expense to help a club they've more than likely never heard of. I've played sport all of my life, and I've never come across this kind of generosity."

Ken Barber comments: "What I saw at Woodford-cum-Membris was no different from any other club that manages its green through volunteers, has a committee which is elected to manage the club and its finances which, ultimately, provide the budget to maintain the green throughout the year. With small bowls clubs, green maintenance is almost entirely dependent on membership subscriptions and continuous fund raising throughout the playing season."

So, what now for Woodford-cum-Membris?

The programme is well underway and members, who can see that something is being done about the green, are volunteering to help out. It's fantastic to see the club coming together again. We're by no means out of the woods and need to start fundraising to buy some machinery, such as the Groundsman, which did such a good job. As well as the green, it's prompted members to improve the state of the grounds and facilities too, and we're grateful to a number of businesses which have supported us in our efforts.