Only two Years after being built, Helpringham Bowls Club in Lincolnshire developed a serious problem with thatch.

"It was such a problem that we genuinely thought we were going to lose the grass altogether," said club chairman Brian Ash.

"We had to find a way of breaking through the thatch to aerate and allow water and air to penetrate.

"At a bowling greens seminar last year we heard about the DJ Turfcare Plugger, went online and ordered a PL400. It has transformed our surface and saved the day."

Greenkeeper Richard Musson used pencil tines on the Plugger PL400 through the late spring and early summer to break through the thatch.

"The Plugger has just transformed our day-to-day operations," says Richard, who has been involved with the bowls club for 30 years, and has looked after the new green since it was built three years ago.

The previous club site was sold for development and the money used to create the new green and clubhouse.

Three years ago the site of an old football pavilion was cleared to make way for the bowling green and clubhouse.

"We turfed the green and the contractor did an excellent job," says Brian. "In fact it was the first bowling green they had constructed but they did such a good job that they have been asked to do a few more since based on the results here."

But two years after the construction of the Helpringham green Richard found it a struggle to keep the grass growing, despite scarifying - with a John Deere pedestrian - and overseeding.

"The problem was a massive build-up of thatch," he says. "I knew we had to break through that and encourage root growth.

"After buying the Plugger PL400 we were able to pierce the thatch with the pencil tines and start putting some life back into the rootzone.

"The next stage is to use the hollow-core tines after the season has ended and get some top dressing into the holes to encourage more root production." One of the main problems with the thatch has been run-off during heavy rain. The thatch caused water to run off rather than get to the roots where it was needed - even when we applied lots of irrigation. Water was simply not improving the situation.

"Using the Plugger every 10 days with the needle tines has worked a treat and the results are incredible," says Richard. "The roots are way down now and able to keep the surface grass looking good, despite the very hot dry weather we have had this year."

Irrigation, from a hose and sprinkler on a tractor unit, during the very dry early summer months was able to give the grass a real boost.
Club chairman Brian Ash, a former builder and retired footballer who played for Skegness and Boston, won the singles bowling title at the Skegness open in 1977.

"The bowls club is a central part of village life," he says. "The club is vitally important to our 20 or so members and we are lucky to have been able to develop such a great facility with an excellent clubhouse. Helpringham has had a bowls club for more than 70 years." 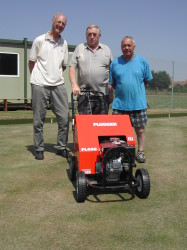 Richard says the Plugger PL400 has given the green a new lease of life.

"We had heard about the results it could achieve at a bowling green seminar and it has lived up to all the expectations. It is the best bit of kit the club has."

Richard's plan of action for the green is to use granular weed and feed products together with moss killers early in the season.

his is followed up with summer feeds and an autumn feed.

"Being able to aerate on a regular basis gives us a chance to keep the green in perfect shape," says Richard.

"We are delighted that the Helpringham team have had such success and that it is helping to keep their bowling green one of the best in Lincolnshire."