A huge herd of "teenage" cows broke loose and took over a golf course in Wirral this morning. The 40-strong group went on an adventure to the greens of Arrowe Park Golf Club at about 7am (Tuesday, June 8). 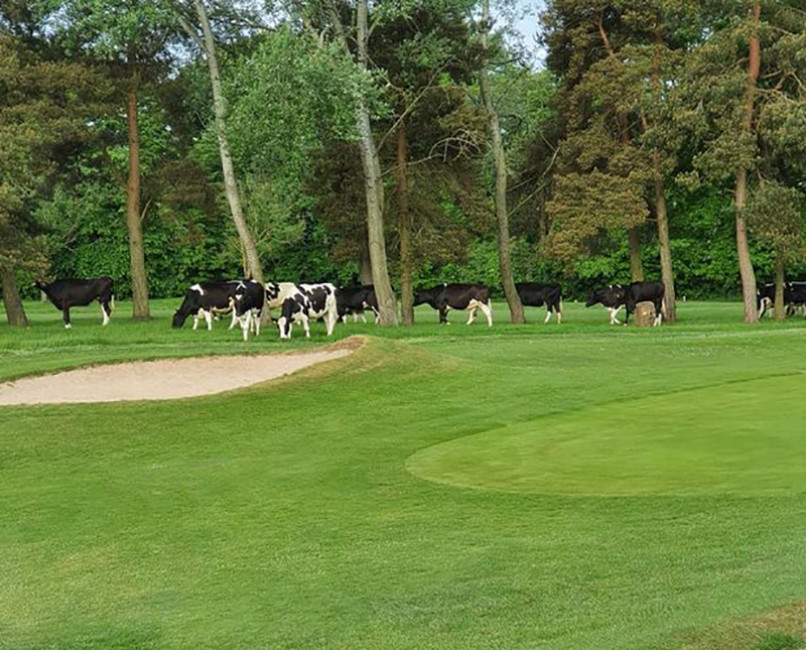 As well as enjoying the delicacy of golf course grass, they also delighted early morning joggers and dog walkers who stumbled upon the rare sight.

Keith Douglas, who lives close to the course, said: "I walk my dog there every morning and I have never seen anything like it.

"I heard they had come in via the sixth hole and they were just stomping around. Luckily, I had my dog on the lead at the time. It certainly was an usual thing to see."

Farmer Jon Appleby from Greenhouse Farm confirmed the cows were all back safely following their jaunt to the golf green.

He told the ECHO: "I am very grateful to all the people who called to let me know they had escaped and all the joggers, dog walkers and passersby who offered to help get them back to their field.

"And I would like to thank people's patience as we had to walk the cows back along the main road. Usually cows can run, but I think they had tired themselves out and by the time they got back to their field they looked grateful to be home."

Farmer Appleby said the young dairy cows are almost two years old and will have their first calfs later this year.

After that, they will produce unpasteurised milk for the farm to sell which Mr Appleby says is a big seller.

He said: "People come from all over Merseyside because unpasteurised milk is said to help with some medical conditions and some people who are lactose intolerant find they can drink it - others just prefer the taste.

"There are very few dairy cows left in Wirral now, and these cows are just like teenagers as they are just over 18 months old."

A spokesperson for Arrowe Park Golf Club said: "It is not an occurrence that happens often, I think the last time they paid us a visit was about two years ago.

"One of our greenkeepers spotted them and because he used to work at the local farm he was able to contact them and get them to come and usher them back to their field."

"They were all fine and did not cause any damage to the green because it is July and in July the ground is quite hard. Had it been January, when the ground is soft, we may have had an issue with five-inch hoof indentations because they are so big."