Ransomes Jacobsen President David Withers was the proud recipient of two accolades for Ransomes Jacobsen at the Heritage Awards, presented at a special reception held at the Royal Windsor Racecourse recently.

Organised by the founding editor of Service Dealer magazine, Chris Biddle, to celebrate the 25th anniversary of the publication, the Heritage Awards recognised the products, the manufacturers, the innovations and the innovators that have shaped the turfcare industry over the decades.

Initial nominations were invited from across the industry, which were then reduced to a short-list and voted for in an on-line poll by dealers, suppliers and members of the turfcare industry. 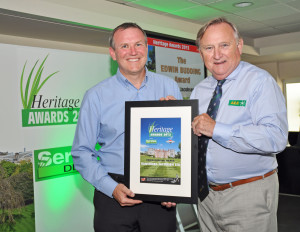 "When we set out to identify the Heritage Awards we asked our readers to nominate their suggestions in a number of categories which included Professional Turf Machinery," Chris Biddle said. "We received a large and varied response, from which we chose the top five to form a short-list of which the Ransomes Mastiff was one of the five. These were then voted upon online and, I have to say, the Mastiff was a clear winner.

"In recognition of their extraordinary 181 history of manufacturing turfcare equipment in the UK, there could only be one winner of the Edwin Budding Award and it was pleasure to present the award to David Withers."

Ransomes Jacobsen is a Textron Inc company and more information on the product offering can be found at www.ransomesjacobsen.com.