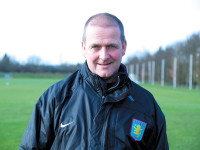 Steve Harper, Head Groundsman at the Aston Villa Bodymoor Heath Training Ground, is one of those guys that you just have to admire. A true unsung hero, for 17 years he cycled to work in all weathers and toiled alone in maintaining Villa's training facilities at Bodymoor Heath, near Coleshill on the northern outskirts of Birmingham. He laughs about it now, but has to admit that it was a lonely existence then with very few resources available apart from a couple of mowers and a bit of aeration kit.

Things change though, and viewing the new state-of-the-art indoor training complex which opened in May 2007, and new all weather pitches currently under construction during my guided tour with Steve in mid January, it is hard to believe the transformation.

As befits a high ranking Premier League team the importance of high quality training facilities to match the stadium, have not been lost on Villa's management and investors.

In the early 1970s Aston Villa Chairman Doug Ellis recommended his fellow directors purchase farmland at Bodymooor Heath for training purposes. The site was naturally free draining with 20cm of topsoil over a gravel bed, below which lay very deep sand deposits. 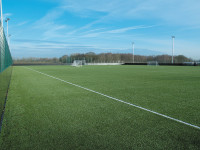 The adjacent area is still being actively quarried for sand.

Very soon the newly built facilities were in use and considered, at the time, to be very high quality, compared to the old Trinity Road training ground at Aston. By the late 1990s however, Doug Ellis was receiving heavy criticism from Villa Manager John Gregory for lack of investment. Accusations of Ellis of being "stuck in a time warp" were publicly supported and widely debated by many frustrated Villa fans.

Finally, bowing to pressure in Nov 2005, Ellis announced plans for a new £8 million redevelopment at Bodymoor Heath in two phases and promised that "world class training standards" would soon be in place.

Unfortunately fate intervened and the 2005-2006 Premier League Championship performance of Villa, was well below the predicted 10th-12th place. With the club ending the season in 16th position, Doug Ellis decided that the already scaled down construction plans at Bodymoor would be halted. 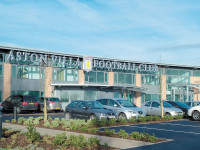 n September of 2006 Aston Villa was purchased by Randolph Lerner and the club announced that the shelved project would recommence with immediate effect. By May 2007 the brand new multi-million pound indoor training complex was unveiled to an eagerly awaiting press.

The new development now offers every possible modern facility and luxury that sports science can offer for advanced training. Hard on the heels of completed building work are the highly advanced all weather outdoor pitches currently under construction. These are due to be completed by July 2008 and will offer Aston Villa the opportunity to train on playing surfaces which are truly 'world class' and will certainly equal Villa Park Stadium standards to give total consistency on both training and home match days.

The new work is being watched with enormous interest by the three full time grounds staff at Bodymoor Heath consisting of Steve Harper, Graeme Farmer and Karl Prescott. It will be their responsibility to maintain the new surfaces as well as manage the traditional indigenous natural grass surfaces, currently still being used by the first and second team together with the juniors.

When the new pitches are finished, the old ones will be used by the Academy players who will also have use of a new enclosed UEFA 2 Star synthetic pitch recently completed. This is constructed on a concrete base supporting a rubber shock pan on which is laid the sand and rubber crumb filled synthetic turf surface.

The remaining work will now focus on constructing two floodlit FibreSand natural grass pitches with full irrigation and under pitch heating, and a Desso Grassmaster pitch which will be identical to the one installed at Villa Park in 2006. In addition there will be new integral goalkeeping practice areas; the whole new outdoor facilty being surrounded by a running tack, which will incorporate stamina building gradients. 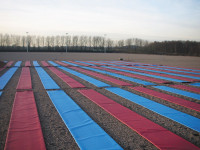 The work is being undertaken by sports construction contractors John Mallinson (Ormskirk) Ltd working closely with Professional Sportsturf Design Ltd of Preston. The irrigation is being installed by Osprey Irrigation who are based at Wem in Shropshire. Mallinson's successfully won the contract amid fierce competition on the strength of their previous Desso pitch installation work at Villa Park in 2006 as well as value for money considerations, suggesting that the new Villa hierarchy were no longer prepared to sacrifice quality for pure price advantage.

Mallinson's have a long and well established record within the sports industry and have worked for many of the most famous names in football. Their testimonial list reads like Who's Who of Premier League clubs with Manchester United, Manchester City, Liverpool, Bolton, Blackburn, Derby County and Fulham featuring prominently.

Learning to work with synthetic and FibreSand pitches will be a steep learning curve initially for Steve and his dedicated little team, although expert advice will be readily available from colleagues at Villa Park and PSD Agronomist John Hacker. "We are already swatting up on the maintenance techniques required, but it seems fairly straightforward" says Steve. "I don't anticipate any real problems in getting to grips with the new technology, it makes life much more interesting and is a wonderful opportunity for all of us. I have been at the training ground since 1801 when there was absolutely nothing here and to see such fantastic facilities appearing is just brilliant, I can hardly believe it really, but Martin O'Neill is a great guy and a natural leader, the confidence at Villa is 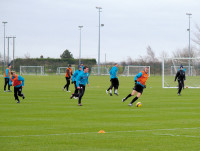 fantastic and at every level thanks to him."

The total area of the site is approximately 10 hectares and, in addition to the previously mentioned new developments, has three original natural turf full sized pitches, plus goal keeping area and three junior pitches, together with a recently installed 'Field Turf' synthetic pitch with floodlights. "The old pitches are currently in full use by everyone including the 1st team" Steve says, "and will be until the new pitches are commissioned. After that, all the old indigenous pitches will be used by the Academy, but we will still maintain them to the best standards possible.

We are looking to improve the all weather capability by regular aeration and decompaction together with considering sand banding. Last year we called in local contractor, Phil Day, to strip off the turf to 25mm depth to get rid of thatch build-up and help level the surfaces, before applying 700 tonnes of rootzone and reseeding. This has made a big difference to the playability. However, soil compaction remains a problem with such high current usage, and regular maintenance is essential to sustain a playable surface in heavy rainfall periods."

The annual maintenance and end of season renovation programme has always traditionally been done 'in house' by Steve and his team. It consists of scarifying the pitches followed by verti-draining and rotary decompaction. Topdressing (70/30) is then applied at 60 tonnes per full sized pitch before drag-matting to incorporate the sand into the rootzone area. The pitches are then overseeded from three directions and fertilised before further drag-matting to complete the work.

"Last year we had a deluge of rain immediately afterwards which washed away all the seed" reflects Steve sadly. "It was very disheartening and I despaired of getting the pitches ready in time with the worst weather conditions I could ever remember closing in for weeks on end. We worked incredibly hard to dodge the weather and keep going and it paid off in the end as we were eventually rewarded with really good grass cover. My two groundsmen, Graeme and Karl, were brilliant and supported me totally, I just couldn't have done it otherwise."

In addition, a tank mix of bio-stimulants, together with an amino acid formulation from Rigby Taylor, is applied every four weeks to encourage root development. "Apart from spraying for annual weeds, worms and leatherjactets when necessary, plus regular aeration, line marking and mowing, that's it," says Steve. 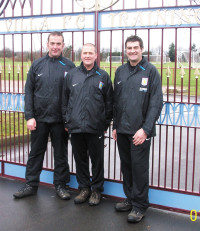 Steve is supported by agronomist John Hacker who visits every six weeks to act in an advisory capacity. John has also been working closely with Mallinson's and the other contractors on the new site, project managing, liaising and producing specifications where necessary.


"We are so lucky and very proud now," concludes Steve Harper smiling and nodding towards the beautiful silhouette of the new indoor complex. "To be a part of all this at a time when Villa are achieving greatness once again. It wasn't always that way though, in the early days they could have named the Villa fanzine 'Heroes And Villains' after me; when the pitches were good I was the former and when they were bad I was the latter" he laughs.

A lifelong Villa fan, Steve started work at the Dunlop Sports Ground upon leaving school. This was followed by a short stint at the I.M.I Sports Ground under the guidance of ex Blues player, Frank Mitchell. A keen crown green bowler Steve lives with his wife Sandra and daughter Nicola at nearby Coleshill.
So just how much is the new Aston Villa Training Ground costing? Well, I asked the question too, and figures of £16-20 million are suggested, but as yet are unconfirmed.

My thanks to Aston Villa Football Club and the staff of Bodymoor Heath Training Ground for their warm welcome and cooperation.