by Sarah Hallen, Peak Ecology
in Consultancy
on 01 Nov 2010 Of all sports' facilities, golf courses, with their mosaic of habitats, provide arguably the best conditions for a range of UK wildlife species. Despite the large areas of intensely managed grassland, which are obviously vital to the function of the golf course, the type of other habitats common on golf courses, such as waterbodies, rough grassland, scrub, trees and hedgerows, are ideal for wildlife.

As habitats disappear across the country, golf courses are becoming increasingly important for the wildlife potential they have, and this is increasingly recognised on their inclusion within local councils' Biodiversity Action Plans (BAP) and with national designations for their wildlife conservation importance (over 100 golf courses in England are wholly or partially designated as Sites of Special Scientific Interest SSSI).

In particular, golf courses provide good conditions for amphibians and reptiles - together, these are referred to as herptiles [no, we didn't know that either. Ed.]. The majority of the general public are unaware of the presence of these creatures on our shores, associating reptiles, in particular, with tropical climates and assuming these creatures to be something we should fear. In fact, as well as frogs and toads, three species of newts are native to the UK and six species of reptiles.

Perhaps the most notorious of amphibians amongst landowners and developers, the great crested newt (Triturus cristatus) is the largest of our native amphibians, growing up to 17cm in length (other UK newts tend to reach only 9cm in length), and easily distinguished from lizards, which they are often confused with, by their bright orange belly.

Great crested newts are well known amongst developers and land managers, including golf course owners seeking to expand or significantly alter their courses, who have heard many horror stories about huge sums of money invested in the protection of one newt! However, the presence of this species, if identified early, will rarely halt a project, and ecological consultants can work with land owners and developers to ensure cost effective and sensible solutions are reached, that will safeguard this species as well as ensuring the continuation of any development works. As for reptiles; adders (Vipera berus), grass snakes (Natrix natrix), common lizards (Zootoca vivipara) and slow worms (Anguis fragilis) are present across much of the UK, with the smooth snake (Coronella austriaca) and the sand lizard (Lacerta agilis) having a more restricted distribution in the south of England.

Often feared by the general public, reptiles in the UK pose only a minimal risk to humans, with an adder much more likely to escape into the undergrowth if they see any sign of danger, rather than stay put and attack!

Although they have different life cycles and habitat requirements, both reptiles and amphibians have, in common, the need for a variety of habitats in close proximity. Golf courses could provide a haven for reptile and amphibian species, that are at risk due to a decline in suitable habitat and, by ensuring appropriate management works, their presence may go unnoticed.

These amphibians are most often seen in water, although they are only usually present in ponds between mid-March and mid-June. During this time, the males will perform complex courtship displays and the females will lay the resulting eggs within the pond's vegetation. Each egg is individually wrapped within the leaves of the aquatic vegetation. The adult newts will then leave the ponds and forage within woodlands, scrub and rough grassland, using habitat corridors such as hedgerows, to move between suitable sites. Newts will forage at night time and will usually move only in temperatures higher than 5OC, and particularly on damper nights.

During daylight, newts are most commonly found in damp, dark places, such as under rocks or in piles of vegetation. The juvenile newts, which are aquatic and possess gills, live for around three months in the water. During this time they will grow rapidly and, eventually, will lose their gills and leave the ponds. They will then live on land for up to three years until they are sexually mature, when they will return to the ponds to breed. A small number of juvenile newts will not undergo this process in their first year, and will remain in the pond over winter until the following year, when they will lose their gills and become terrestrial.

Great crested newts are carnivorous and will feed mainly on insects, although they have been known to eat other newts.

Reptiles will hibernate over winter in dry places that are free from frost, including features such as old rabbit burrows, compost heaps and rubble mounds. They will begin to emerge from hibernation in spring, when they will first seek to mate before foraging continually over the summer. Adders, common lizards and slow worms will incubate their eggs within their body and will lay 'live young' in late summer. Grass snakes, however, will lay eggs in June/July, in rotting vegetation that will incubate the eggs for them. The eggs will then hatch in late summer. Juvenile common lizards and slow worms will then forage on small invertebrates, while juvenile grass snakes forage on amphibians and fish, and adders will forage on small mammals and lizards. 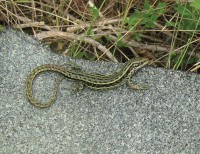 In order to fulfil all of these stages in their lifecycle, reptiles need a range of habitats in relatively close proximity to one another, although adult grass snakes can maintain a home range stretching up to 5km. Ideally, reptiles require open areas where they can bask in the sun in order to warm up for their day's activities. However, in close proximity they also need more overgrown, rough areas where they can retire to if they sense danger. They also require good foraging habitat, which may include ponds and rough grassland, as they forage on small mammals, amphibians and invertebrates.
Ideal environments

It can be seen that the conditions provided by golf courses, with waterbodies, rough, fairways and footpaths, provide an ideal mixture of habitats that can satisfy the requirements of both reptiles and amphibians, without too much additional work from the course management.

Heathland golf courses, of which there are many fine examples across the whole of the UK, provide possibly the best habitats for amphibians and reptiles, with the perfect mix of habitats for warmth, shelter, foraging and dry conditions suitable for hibernation.

However, all golf courses can offer some potential for these species, and simple steps can be taken to consider the wildlife potential of course redevelopments or the construction of new courses.

The UK has long been a stronghold for great crested newt, which has suffered severe declines across continental Europe, where pond destruction, either through neglect or for development, has resulted in a severe decrease in available breeding habitat, and the fragmentation of suitable terrestrial habitats has made it harder for newts to move to another, suitable pond. However, these declines are now being mirrored in the UK, where lowering of ground water levels for development, destruction of hedgerows and increased pollution are resulting in declines in this species.

In order to attempt to halt the decline of this species, great crested newts are now protected under UK and European legislation. In practice, this means: destruction of habitats, killing, injuring, disturbing, taking or offering for sale, all of which can result in hefty fines and/or imprisonment! This means that a licence is required in order to survey for this species.

The four widespread reptile species in the UK; adder, grass snake, common lizard and slow worm, are currently relatively common, if often undetected. However, it is widely considered that these species are suffering declines across the country, due to loss of habitat or fragmentation of areas of suitable habitat. All UK reptiles are now protected from killing, injuring and sale, in an effort to halt the declines in their populations.

Golf courses provide an ideal opportunity to create 'safe havens' for these declining species, with only simple changes to the habitats and the management that is already in place. In fact, several golf courses around the UK are known to have populations of great crested newts and good reptile populations already present, and may have done so for several years, without any impacts on the running of the course and the enjoyment of its use.

Several simple steps can be taken to encourage these species to colonise golf courses:

• Ponds - great crested newts prefer to live in medium sized ponds that are well vegetated, but also have areas of open water, as these are used by the males for their elaborate courtship displays. It is also ponds like this that look the most visually appealing and, therefore, would fit in well on a golf course. Newts like to live in places where there are several medium sized ponds in close proximity to one another, and this can easily be considered in the design or redevelopment of courses.

• Fish - fish will eat great crested newt larvae and so, if possible, ponds on golf courses should not be stocked with fish. Frogs and toads should, however, be encouraged as they provide a great food supply for reptiles.

• Habitat - as mentioned above, all herptiles like areas of rough grassland, scrub and woodland, all of which are usually readily present on golf courses. These habitats will require no additional maintenance to ensure that they provide perfect conditions for newts.

• Connectivity - if possible, habitat corridors; lines of habitat connecting other habitat features, such as a strip of rough grassland between two ponds (for example, along the edge of a fairway) or a hedgerow between two patches of woodland, should be incorporated into the course design to allow herptiles to move freely between 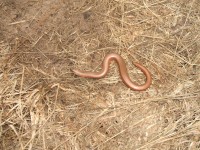 all the ideal habitats that are present. It is no use creating a lovely, fish free pond, ideal for breeding newts and foraging reptiles, if the animals have to cross the shortly mown green, where they are at risk of aerial predation, to get to it! The connectivity does not need to encircle the pond, a strip of rough along the rear of the green, connecting to one side of a pond and along the side of the fairway, would provide an excellent habitat connection.

Prior to any alterations to golf courses, the presence of herptiles should be confirmed (or otherwise) by an appropriately licensed ecologist, who can offer advice to ensure that the works will not result in breaking the law and causing harm to these species.

For those simply enjoying the golf, without being actively involved in the management of the course, the presence of herptiles will rarely be detected, unless you are playing particularly late into a damp dusk or early on a damp morning. However, by regularly using golf courses that actively seek to encourage protected species, golfers are contributing to the maintenance of these vital spaces and, hopefully, ensuring the survival of this, and other, increasingly rare species in the UK.