0 He's out of this world

For two decades, green-fingered Graham Park was one of the Queen's most dedicated and valued employees.

Little did Her Majesty know his hobby would one day put him on top of the world and make him a king in his own right.

Born in Torphins, Graham was put in charge of the royal gardens at Balmoral Castle in 1979.

His job was to ensure the flower beds had the wow factor all year round - when the Queen and her family was in residence during the late summer and when the grounds were open to the public.

However, by then other royal workers - and probably members of the family in the "big hoose" - may have noticed the young worker was changing shape.

Fired by an ambition to get fit, the determined gardener had taken up body-building in 1988.

Eight years ago he moved to work at the Duke of Fife's Elsick Estate at Cammachmore, near Stonehaven. But Graham was still determined to hone his muscles to perfection. 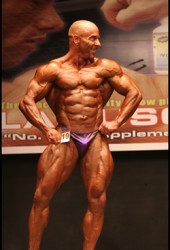 He opened his own gym, Results, in Aberdeen's Urquhart Road.

And after winning a clutch of titles and trophies, our body-building gardener hit the jackpot when he won the prestigious Mr Universe title for the over 50s.

Today the 51-year-old grandfather is back home working on the land - and still stunned that he finally grabbed the top title.

"I keep pinching myself," he said.

"It was a dream come true after all these years of work.

"I began thinking I could do it about four years ago and in 2005 I came in the top six in the over 40s section.

"Last year I was fourth in the over 50s. And this year I thought it might just be my turn. But that didn't stop me being nervous!"

Organised by the National Amateur Body Building Association, the contest was held in Southport.

Now Graham is setting his sights on the World championships in June and the Mr UK title.

Meanwhile, he is devoting a lot of time to helping his wife Joyce, who is no slouch in the body-beautiful stakes either.

The pair have trained together for many years. But now 48-year-old mum-of-two and gran Joyce is making a name for herself in weight-lifting, already coming fourth and fifth in consecutive World championships.

When they're not in training, the Parks devote their time to their family - Jamie, 30, Heidi, 29, and six-year-old granddaughter Tia.

Graham said: "I can't quite remember why I decided to take up body-building. Maybe because I loved films like Hercules, with Steve Reeves, and Rocky, with Sylvester Stallone. But I never thought I'd get as far as this."

Joyce, who was in the audience for her husband's win on Saturday, said: "I was jumping up and down like a maniac."