0 High capacity spreaders – on a towhitch? 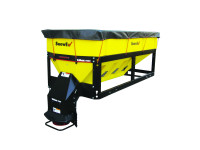 It's a well-publicised fact that this winter has seen some of the coldest weather Britain has experienced since records began; in fact, the Met Office states that December 2010 was one of the coldest months for over 100 years, and indeed the coldest since February 1986, with the UK's lowest temperature reaching the chilling depths of -21.3°C in the Scottish Highlands.

Combating the effects of this freezing weather has been a massive challenge for amenity managers and anyone responsible for keeping public areas free of ice and snow. Heavy ground frosts occurred nearly every night during December throughout the UK, presenting a real hazard for drivers and pedestrians alike, to say nothing of the heavy snowfalls experienced nationwide.

Designed to perform in some of the world's most unforgiving winter climates, SnowEx has almost become a household name over the last three winters, with the popularity of these salt and grit spreaders rising sharply in the maintenance sector. The SnowEx range is huge, and includes mounts to fit spreaders to almost any vehicle, from a forklift to a tractor, and from a 4x4 to a flat-bed truck.

For this winter, SnowEx importer Broadwood International has introduced the SnowEx V-Maxx SP-9300; sales manager Steve James explains the reason for this launch; "We already supply large capacity trailed spreaders but have recently found an increasing demand for a spreader that can be towed behind a vehicle with a maximum GVW of 3.5 tonne. With the new SP-9300, users of Land Rover Discovery's, long wheelbase Mitsubishi Shoguns and Nissan Pathfinders can fully load the spreader with salt or grit, enabling it to work for longer periods between refills, and still tow within the vehicle manufacturer's stated limit."

"The SP-9300 can be used as a flat-bed mounted spreader as the trailer is an optional extra but we anticipate the majority of sales being trailed units, thanks to the SP-9300's ability to maximise the gross vehicle weights of popular 4x4's," says Steve James.

Contact Broadwood on 01420 478111 for a full range brochure on the UK's leading spreader range, and be ready for winter 2011/12. After all, who knows what the weather will bring next winter?