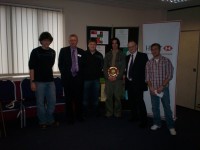 The competition, organised by the Institute of Horticulture (IOH) is open to anyone involved in horticulture under 30 years of age, including anyone studying for a horticultural qualification. Every year the IOH receive entries from over 1,000 young horticulturists.

Five students from colleges across the Eastern region took part in the competition. Chris, representing Writtle College won £25 in the local heat and £200 for the Regional heat.

The Writtle College student entry has been coordinated by Donna Sheringham , Admissions Officer for the School of Horticulture. She commented "Chris was nothing short of superb on the day and had already won by Round 7 (11 Rounds altogether) - the battle was between 2nd & 3rd place."

The winner of the National Final receives a Percy Thrower Travel Bursary worth £2,000, which can be used by the winner to organise a horticultural tour anywhere in the world.