by External source
in Conservation & Ecology
on 08 May 2013 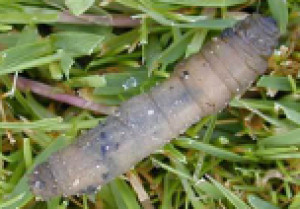 Leatherjacket populations in Scotland's fields are exceptionally high this spring with a very real risk to spring sown cereal crops and grassland. According to the latest annual survey, carried out by Scotland's Rural College in west and central Scotland between November last year and April 2013, population densities of crane fly larvae are at their fourth highest level since the survey started 38 years ago.

Leatherjacket is the name given to the grubs of the crane fly or "daddy-long-legs". They live just below soil level and, from August through to the following June, eat the roots of grasses and other plants.

According to SRUC Ecologist Dr Davy McCracken, who undertook the survey:

"The winter weather may have caused us problems but the grubs are very resilient and all they do in cold weather is reduce their feeding until the soil warms up again. Over 80% of the fields sampled had populations in excess of 0.6 million larvae per hectare and nearly 70% had populations over a million per hectare! It means land in the south and west covered by our SAC Consulting Offices is at risk, including permanent grassland and spring crops sown after grass."

Applying chemical treatments before the land is ploughed is always better than waiting until the damage is underway but in targeting their pesticide programme Davy McCracken warns farmers to take account of the soil temperature.

"Treatments should be applied as soon as conditions allow but that means considering more than whether it is dry enough. The insecticides used to control leatherjackets can be less effective if the soil temperature is below 5 degrees C. Based on our Ayrshire readings many soils will only have reached that in the last couple of weeks which means it is well worth anyone who sprayed early taking a close look at their fields and crops in caser it has been less effective than expected."

Assessment of leatherjacket infestations in individual fields can be carried out for farmers as a chargeable service by staff from SAC Consulting, a Division of SRUC. Farmers wishing to use the service should contact their nearest SAC Consulting office.

Scotland's Rural College has conducted an annual survey each winter since the mid 1970s and these latest results show once again the value of such long term surveillance and the data generated. In addition to the risk posed to crops leatherjackets are an important food resource for farmland birds.

Since the mid 1990s SRUC's farmland biodiversity research has focussed on a better understanding of what drives changes in leatherjacket populations. It shows grub densities fluctuate from year to year but in the past 13 years they have consistently been higher, linked, it is believed, to climate change and wetter, milder autumns.

SRUC acknowledges the support of Scottish Government for the survey.
For more information contact Dr Davy McCracken on 01292 525299 davy.mccracken@sruc.ac.uk .