High Legh Park Golf Club, near Knutsford, Cheshire, has invested close to £214,000 in Toro as part of plans to take the club to the next level. 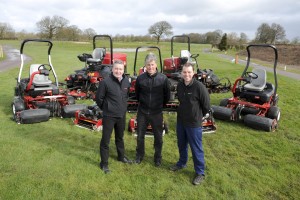 Having previously used a competitor brand, the move to Toro was rooted in the advice and experience of course manager Matt Shimwell.

"I worked at the US Masters at Augusta and the 2007 US Open as part of the Ohio State Intern Program. While there, I gained extensive experience working with many market-leading brands, but found Toro to be the best of the best," explains Matt.

When owner Andrew Vaughn identified a need to upgrade the club's fleet, he liaised with Matt and, following trials, went with Matt's recommendation.

"We demoed other machines, but as my experience showed, Toro proved to be the best machine out there. Ensuring we have the absolute best was vital in Andrew's future plans for the club."

Owner Andrew purchased High Legh back in January 2011 in what Matt describes as a "bad state", with the intention of transforming it into a high-quality course. Since then, he has invested a significant sum of money into it, including the creation of a new driving range, due to open shortly.

"This new fleet will be vital in maintaining the turf of new features such as our driving range and support the goal of becoming one of the best courses in Cheshire," says Matt.

Pre-Toro, Matt explains the difficulties he faced: "Before our new fleet, our machines kept breaking down and downtime was massive due to repairs; we were losing money and time.

"With the Toros, we have more time and our course is in the best shape it's ever been pre-season. We only have five full-time staff, but a lot of ground to cover, so efficiency and reliability are big for us."

Matt adds that the club's local Toro dealers, Cheshire Turf Machinery, have also proved to be a great selling point. "They're close by, so are really conveniently located for parts, which they always have in stock.

"I've also known Peter Mcgreevy [Cheshire Turf Machinery Sales Director] for some years; he helps any way he can, has great advice and is always available."

Reliability and efficiency undoubtedly boosted, Matt adds that he has also seen a better quality of cut, with members even taking note. "Not only is the new fleet great for me and my team, but the club's players have commented on how everywhere looks tidier - it's a brilliant result all-round."