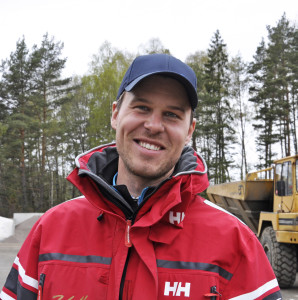 Hills Golf and Country Club situated on the outskirts of Molndal, 10 kilometres south of central Gothenburg, has gone from strength to strength under the ownership of a new three-man consortium headed by European Tour golf professional, Johan Edfors.

The prestigious club has an exclusive supplier agreement with Svenningsens Maskin AB, the Ransomes Jacobsen distributor based near Linkoping, resulting in a fleet of Jacobsen equipment and a 60-strong E-Z-GO golf car fleet.

Hills was designed by Arthur Hills, Steve Forrest Associates and built to be northern Europe's premier championship course. Set within 150 hectares, of which 60 are managed, there is ample space to accommodate large galleries. It opened in the summer of 2006 and at 7,700 yards in length is a formidable golf course.

e has seven tee positions which allows golfers of all abilities to enjoy the course.

The financial crisis hit the club hard in 2011 and the new consortium took control last year, immediately releasing funds to improve the golf course and other facilities at the club.

Kristoffer Palmlund is the course manager and has been at the club since the construction phase in 2003. He graduated from Penn State University in the USA in 2007 and now leads a team of 17 staff, which rises to 24 in the summer months.

Six of the team are full-time including a specialist spray technician and an irrigation technician.

"The new owners have injected significant funding into the club and this major investment has resulted in the construction of a new putting green, a new gymnasium and two paddle tennis courts," he said. "We are also rebuilding four holes; we started in August 2012 and the work is scheduled to be completed in summer 2014. We are doing all the work in-house, which is an exciting challenge.

"In all my time here, we have never had a triplex mower on our greens; we use Jacobsen walking Eclipse mowers and the quality of cut is excellent.

To encourage more community involvement with the club we have employed five guys from the local youth football team for four hours a day to cut the greens in summer. We have six Eclipses and three go out on alternate days, normally cutting at 3.5mm, which is reduced to 3mm if we want to add some

Presentation is everything at Hills and the latest equipment to arrive via Svenningsens is two Jacobsen LF550 light fairway mowers.

All grass clippings are boxed off to prevent thatch build up. These latest additions contrast with the Jacobsen AR250 articulated rotary mowers, which are now six years old and according to Kristoffer are still extremely reliable and do a great job stripping up the semi-rough.