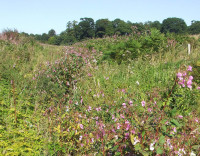 Himalayan Balsam (Impatiens glandulifera) is native to the Western Himalayas and, since its introduction in 1839, has spread throughout the British Isles.

It is the tallest annual plant found in the British Isles, growing to more than 2-3 metres in height. Himalayan Balsam tolerates low light levels and also shades out other vegetation, so gradually impoverishing habitats by killing off other plants.

Each plant can produce 800 seeds, which are released explosively from the seed pods, travelling distances of up to seven metres. The seeds, which are also transported by water, can remain viable for up to two years. Hence, Himalayan Balsam has rapidly colonised river banks, excluding native species by competition.

Colonisation of riparian areas can cause a deterioration of ecological status under the Water Framework Directive, and the UK's Biodiversity Action Plan lists the species as an invasive alien, so many areas have now introduced eradication policies.

The Impatiens family is widely known by the cultivated species, often known as Bizzie Lizzies. This is their big brother! 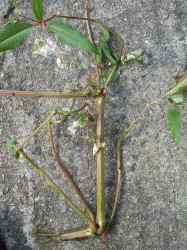 Stems are pinky red, hollow, sappy, brittle and jointed. Branches arise from the stem joints. Leaves are lanceolate (shaped like a lance) with serrated edges, stalked, shiny, dark green with a reddish midrib. Leaves can be 150mm long and are arranged opposite each other or in whorls of three.

Flowers are purplish pink to pale pink or, rarely, white. They are shaped like a policeman's helmet and carried on long stalks in June to October.

Seeds are 4-7mm in size, turning from white to dark brown or black and carried up to 16 per pod.

As the plant is an annual, control methods hinge on the prevention of seeding.

Cutting to ground level before the end of June with a scythe or machete can prevent seed shed, but cutting too early or pulling up whole plants can result in re-growth of flower heads with an even greater number of seeds! Conservation groups often employ 'armies' of volunteers to help with cutting down. 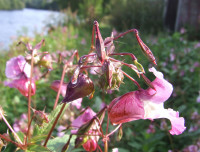 Spraying with Roundup Pro Biactive will give excellent control. The formulation is the safest to use near water and carries no irritant symbol on the can, so is safe to operators, animals and the environment.

Many sites are dominated by thick stands of Himalayan Balsam, so collateral damage to surrounding vegetation is not an issue.
However, spot spraying or weed-wiping can be used to ensure this is minimised in mixed vegetation.

Sites should be monitored annually, for five to ten years, and re-treated to take account of newly emerged seedlings.

When using an overall spray, dose rates are 3-5l/ha in 80-250 litres of water, using the lower rate for seedlings and plants up to 0.5m high, and the higher rate for plants taller than 0.5m.

Spray when good foliage has developed to a height of at least 50cm in late spring, before the end of June. 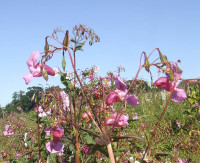 A second treatment may be necessary if more seedlings germinate.

You can also use a hand held weed wiper, such as the Micron Microwipe, which is a useful method when working amongst desirable plants and shrubs. Using this method, the dose rate is one part Roundup Pro Biactive in two parts water.

A knapsack sprayer can be used for spot treatment; most are supplied with a set of four deflector nozzles giving different swath widths, but all deliver 200l/ha of water at 1 bar pressure and a walking speed of 1m/sec.

If using Roundup ProBiactive 450, slightly different rates apply for a foliar spray via a knapsack, at 2.4-4 l/ha in 80-200 litres of water per hectare, for conventional CDA spraying at 2.4l/ha in a minimum of 10 litres/ha water or carrier oil. With the specialist ULV Mankar applicator, the neat product can be used at 2l/ha.

Fascinating fact - The Bionic Control of Invasive Weeds in Wiesbaden, Germany is trying to establish a self-sufficient project to conserve the local biodiversity by developing several food products made from the Impatiens flowers, which will be sold to support the weed control programme - Himalayan Balsam could be financing its own eradication in the future! The organisation has already had some success with jams and other products made from Japanese Knotweed.

At the cutting edge: Abersoch Golf Club has been supported in its eradication programme for Himalayan Balsam by the Countryside Council for Wales and the Environment Agency. The links and parkland course, which is in the Cors Llyferin SSSI, includes areas of marshland which were becoming choked with the invasive weed, as head greenkeeper Arthur Evans explains: "Teams of volunteers come in and cut the plants down each summer - we started some three years ago and, although there is a certain amount of regrowth each year, they are starting to get it down now."