Michael Finch is Curator at the Sydney Football Stadium in Australia. Here, he gives an insight into the hectic schedule at the most utilised stadium in the country

Sydney Football Stadium (SFS) is one of the most utilised rectangular sporting venues in Australia. It is part of the Sydney Cricket and Sports Ground Trust which also includes the world famous Sydney Cricket Ground. Our hirers include the Waratahs (NSWRU), Sydney Roosters (NRL) and Sydney FC (Hyundai A League). Our other hirers include the Australian Rugby Union (ARU), Australian Rugby League (ARL), Football Federation of Australia (FFA) and Cricket NSW. In October and November we will be one of the hosts for the Rugby League World Cup. The Trust will host the opening ceremony as well as a semi final. 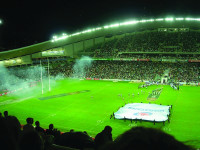 The stadium was designed by Philip Cox, Richardson and Taylor and was built on the old Sydney Sports Ground site between 1986 and 1988.
Seating capacity has increased over the years from the original 40,000 to the current 45,500.
Grass Area and Soil Type
Due to the increase in seating capacity the actual ground grass coverage has decreased over the years. In 1988 it was 12,000 square metres and now in 2008 it is 10,500 square metres. Grass type is Greenlees Park couch which is oversown with Arena ryegrass. The area also includes six full length turf practice wickets at the southern end. We are also trialling a new couch grass called Grand Prix. It has been installed at the southern end of the Stadium covering 1500 square metres.

Soil type on the main field of play is a 85:15 mix, with no reinforcement, to a depth of 300mm. There is then a gravel layer with a herringbone drainage system installed. Beneath the drainage layer lies the natural sand base.
Soil type on the turf practice wickets is 65% clay called Oberon. 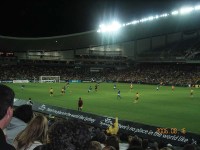 Usage
In 2007 the ground was utilised in the following manner: 54 games, 101 training sessions, 37 events and 22 others. These figures do not include training sessions on the turf practice wickets which are utilised from October to February.
Part of the agreement the Trust has with hirers is that the ground is available for training sessions. This can range from one hour to two and a half hours per session. We have had instances whereby the ground has been set up for rugby training in the morning then changed over to soccer training in the afternoon. Training has also been conducted on game days.

Over the years SFS has gone from just being a football ground to a multi purpose stadium. This is now common practice in all the major venues within Australia. The 'others' includes film shoots, promotions and large concerts. Generally, we have two large concerts per year. In 2007 we were the Australian host for Live Earth. Some other major artists have been Robbie Williams and U2.

Ground Set Up For Match Day
This mainly depends on what code we have on a particular day. Each hirer has certain requirements including ground markings, cutting patterns, height 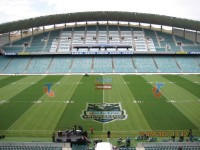 of grass, logos and perimeter set up. It is common practice to have two codes on a weekend. There is always training on the day/evening before, for which the hirer requests all field markings to be in place. On match day the ground is cut to the specified height of the hirer. This can vary between 25mm and 35mm. If we have two codes on the same weekend with different heights of cut then we do a compromise cut of 30mm. The ground is also remarked.

If a changeover is required then malt extract is included in the paint. The malt allows us to remove the lines easier. Basically it stops the paint adhering to the leaf. Our normal mix is 6lt of malt , 9lt of water and 7.5lt of paint. The malt can be increased, but you must remember that the more malt that you add the easier the lines come off. The problem is that you can lose the lines in rainfall so you must be very mindful of the current weather conditions. The maximum we have gone to is 12lt of malt, 3lt of water and 7.5lt of paint.
Once the event is concluded the changeover process will commence. This will involve four groundstaff removing line markings and various contractors removing grass logo signage as well as perimeter signage.
Generally, the groundstaff will finish at 11.00pm with the contractors finishing about 2.00am. Cleaning of the venue is undertaken by contractors.
A fresh crew is then brought in the next morning. The ground is cut and re-marked to the hirer's particular needs. This may also include the changing of 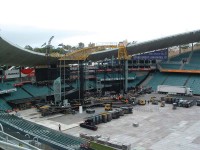 Staff
SFS has a Ground Manager/Curator, two assistants and one apprentice. Overall, with the SCG and SFS staff combined, there are two Ground Managers, five groundstaff, two horticulturists, one mechanic and four apprentices. The majority of the staff is under the direction of Tom Parker, the SCG Ground Curator. The staff have their core areas but are also required to work in other areas as well. The apprentices are put on a rotating system. All staff are also on a two month roster with four days off in fourteen.

Machinery
The main machine utilised on the ground is a John Deere 3235c fairway mower. Heights of cut can vary between 15mm and 35mm. During summer the ground is generally cut every second day. During winter this can be reduced to once per week. Most of the machinery is shared between the SCG and SFS. These include:
2 x 65 hp Lamborghini Tractors
1 x 25 hp John Deere Tractor
1 x 7316 Vertidrain
1 x 400lt Silvan Boom spray
4 x John Deere buggies
2 x Super Soppers (hardly utilised)
1 x Sisis Variseeder
1 x Amazone 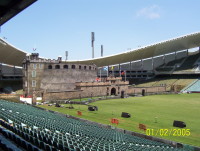 Aeration
Aeration of the ground is carried out monthly. This is carried out by a vertidrain 7316. Both solid and hollow tines are continually rotated as well as varying depths and configurations.

Fertiliser
Our fertiliser regime is based on both granular and liquid feed programmes. Granular feeds throughout summer are generally a 23:1:11 + TE then changed to 13:0:24 + FE throughout autumn and winter. These are applied at the rate of 3kg/100m2 every four to six weeks. Other granular feeds include Dynamic Lifter + blood and bone. Soil testing is conducted every three months. Our general problem is normally our Cation Exchange Capacity (CEC) which is always low.

Both foliar and soil drenched liquid fertilisers are also incorporated. We are also a big user of biological products, such as beneficial fungi and bacteria, which has helped in a dramatic reduction in the use of chemicals and keeping the population of Plant Parasitic Nematodes (PPN) at a constant low level. Some of the products are humic and fulvic acid, root stimulants and kelp. 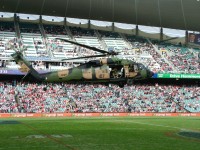 The ground is soil tested every three months for nutrient analysis and ph. Nematode testing is conducted monthly due to previous problems many years ago. Water testing of the Trust's two onsite bores is carried out every three months.

Renovation
Many years ago the time frame for doing major renovation works on the ground was from October to March. It has now been reduced to three weeks in December!

Our renovation each year includes the removal of the entire surface to a depth of 40mm and replacing it with new couch grass. This year the challenge is on to see whether we can have a stabilised turf in place in sixteen days. It takes five days to strip the surface and re-lay new grass. The turf will be cut at 25mm. The reason we do this is to return to a full couch surface by January and have a stable and secure surface in readiness for the rugby season.
We have tried, in previous years, to keep the ryegrass in over summer, but this has created an unstable surface the following year. Rugby union scrums are the hardest on the playing surface with the weight of each scrum averaging between 800kg and 850kg. Due to the time restraints we are also going to conduct very slow ryegrass removal trials in August using sulfuron based products at the southern end. It is like trying to do a balancing act whereby we slowly kill the ryegrass to promote the couch grass.