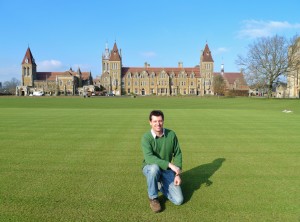 Grounds Manager David Roberts has a longstanding relationship with representative Bob Scott of DLF and Johnsons Sports Seeds, who helped to formulate a bespoke mixture for the Charterhouse outfield. But until last year, a variety of mixtures were used on the square itself.

"Last autumn we carried out an aggressive renovation on the square, which we tend to do on an alternate year basis," David explains. "We fraise mowed until the wicket was virtually bare, before heavy scarification and application of 10 tonnes of loam."

Johnson Sport Seeds J Premier Wicket at 35-50g/sqm was then sown before the seed and loam was worked in, and seeding was carried out in four directions.

"The drought in the spring followed by the wet season made life difficult for us last year," comments David, "But at least we didn't have to put on too much water after seeding."

Establishment has been highly impressive, and despite disease pressure after the severe frosts and snow, the Charterhouse team were able to make a first cut in early February.

"It looks very positive - the seeds have come through really well," says David. "We normally need to overseed again in the spring and will probably do so as a precaution, although the density is very good."

With a hectic programme of cricket throughout the season, the ability of Dickens, Chardin and new variety Natasha in J Premier Wicket to withstand close mowing will be crucial.

"We cut to 14mm on the square and down to 2-3mm on the wicket, and with the need to dry out the ground and roll, the en

ds of the strips can start to break up. So a mixture that can hold together well will be a big advantage," he comments.

David will aim to overseed once more during the season as the programme allows, and the rapid establishment and strong shoot density of J Premier Wicket will be invaluable in a busy summer.

"We get very good service from DLF, with plenty of support which gives you confidence. And with the excellent establishment we have seen with J Premier Wicket after such a comprehensive wicket reinstatement, I am more than pleased."