Hockley Golf Club, founded in 1914 and situated in the western gate of the South Downs just outside Winchester, has taken delivery of a Ventrac 4500 compact tractor and three out-front attachments from UK distributor, Price Turfcare. Appointed almost five years ago, Glenn Kirby is the Course Manager, who previously worked as Assistant Golf Course Manager at The London Club for nine years. He is a graduate of the Ohio State programme where he interned at Westchester Country Club in Harrison, New York and Oakhill Country Club in Rochester, New York during the US PGA Championship.

"I think the Ventrac was lodged in my psyche after initially seeing some favourable postings on social media," he said. "I recalled using a similar product at Westchester back in 1999, so I had a vague idea of how versatile it was. We had a requirement for a rotary tees and surrounds mower capable of handling our undulations.

"I'm in regular contact with my old boss, Peter Todd, who had a demonstration of the Ventrac earlier in the year, while still at The London Club. He was very impressed and suggested I take a look at it. I also spoke to Darren Scott, of our local dealer DJ Scott and he also recommended it. So that was two respected opinions and I then contacted Rupert Price.

"He organised a demonstration in early May and I have to admit that I was sceptical at first. We are located at the western boundary of the South Downs National Park and to say that we are undulating is an understatement. Also the origins of the area can be traced back to 500 BC and during the Bronze Age, the methods of cultivation created large earth banks and extensive furrows all over the course. There's even the remains of a Roman villa under the 9th green.

"The first demonstration was with the Contour deck and I quickly went from sceptic to fan; the way it followed the undulations was very impressive and it ticked a box straight away. We then tried the Rough Cut deck and it was amazing how quickly they changed 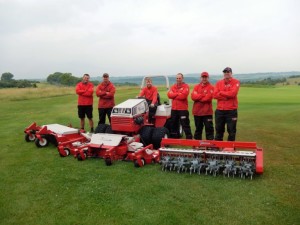 from one to the other. The coupling system is ingenious and makes the change-over very efficient. Again the deck worked much better than I thought it would and with eight tyres spreading the weight of the tractor, it can tackle quite severe slopes. Another box ticked!

"However, what really sold it was the Aera-vator attachment; this a vibrating aerating head that will enable us to punch holes on slopes and that's a game-changer. We'll be able use it on all green surrounds, tees and fairways. I'm very excited about the possibilities of this machine; it's so versatile and does everything I want it to.

"The Contour deck performed excellently around our bunkers. It's a time consuming job strimming bunker surrounds; it normally takes two men a day to complete the task. We now do this, and the tee banks, in just four hours. That frees up the guys to do other vital tasks around the course.

"Yes, I think it's apparent that I'm a fan; I'm already thinking about what other attachments I can use on the rear three-point linkage. This is a new machine to UK market, but with the support of DJ Scott and the reputation of Rupert Price, I know I have a made a really positive decision for the club and its members."

Glenn leads a team of six full-time staff including a dedicated mechanic and also has a group of three volunteers from the golf club membership, who assist in various duties maintaining the 18-hole course, which is designated as a Site of Importance for Nature Conservation (SINC). The design of the course traces its heritage to James Braid, who re-modelled and lengthened the course in 1920, when two nine-hole courses were combined to create its current configuration.