0 Hole in one at John Deere Championship

Hole in one at John DeereTeam Championship

Rosemarket Golf Club's captain, John Davies, had a good reason to celebrate when his team played in the John Deere Team Championship tournament, organised by local John Deere dealer Powercut at Haverfordwest Golf Club. JC, as he is better known, got a hole in one on the 150 yard 6th hole.

"Nothing can beat this," said JC who plays off a 16 handicap, "My ball landed on the green and our Greenkeeper Danny Young , who is taller than everyone else in the team, actually saw it go in, and so did the team in front of us.

"To get a hole in one must be any golfer's dream, but for me to do it in a competition with so many really good golfers there was fantastic. I played in the John Deere Team Championship two years ago and got a two but this is the first time I have ever had a hole 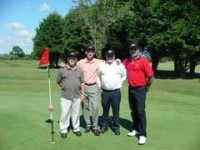 The Rosemarket team finished fourth in the competition which was won by the team from Garnant Park Golf Club near Ammanford, Carmarthenshire.

This is the third year the John Deere Team Championship has been played in Great Britain and Ireland, although it has been running in the USA for 18 years. John Deere dealers across the country run local qualifying tournaments, with this year's winning teams going forward to the national finals at Forest Pines in Lincolnshire in August.