0 Hollow Coring and Deep Scarification - Is it really necessary? 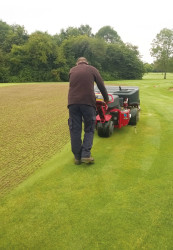 If sports turf managers were to start from scratch today, to design a way of maintaining low thatch, decompacted, fast draining rootzones, then the key design parameters would be - minimal disruption, minimal cost for manpower, machinery and consumables, minimal use of finite resources, whilst converting the thatch to plant food, humus and organic acids to increase CEC, retain fertilisers and support the natural processes that create free draining, friable rootzones.

Compaction leading to poor infiltration rates, a build-up of thatch and anaerobic conditions are inbuilt design flaws of most heavily used sand based golf greens and sports pitches. Most current thinking suggests that a physical solution is the only answer; consequently, a lot of the turf manager's time and budget is taken up by the physical removal of thatch and hollow coring and topdressing to dilute thatch, improve drainage and relieve compaction.

Physical maintenance, in the form of deep scarification, hollow coring and heavy topdressing with up to 200 tonnes of sand per year, is time consuming, expensive, disruptive, uses finite resources, temporarily reduces the enjoyment of the game and results in lost play and lost income for the club.

Less obvious and longer term implications of heavy topdressing to dilute thatch is the storing up of problems for later years, when the organic material may become buried below the reach of most solid tines, so oxygen is not available to convert it aerobically to beneficial organic matter, it also dilutes the plant nutrients N, P, K, Ca, S, Mg, Cu, B, Zn, Mn, and reduces Cation Exchange Capacity (the nutrient holding capacity of the rootzone) requiring more fertiliser applications which, in turn, produces more thatch.

There is another option adopted by many golf course and sports pitch managers that have been successfully managing their playing surfaces for many years without deep scarification or hollow coring and heavy topdressing, as the brief case studies within this article show. 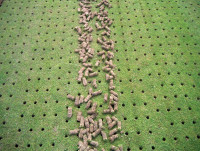 The alternative to physical disruption, thatch dilution and rootzone replacement is to degrade thatch and encourage natural processes to decompact the rootzone and incorporate these processes into the daily management of the pitch, greens or any grass sports surface.

Healthy grassland soils comprise 50-60% soil particles, 15-25% air space and 15-25% water. You only have to take cores out of the rough of most golf courses to see that it is almost thatch free and friable because natural processes are at work. The key to easy turf management is to get these processes to work in the largely artificial environment of a sand based rootzone.

To successfully implement this strategy, the first misconception to knock on the head is that organic matter is bad. It is not. Organic matter in the rootzone comprises roots, humic compounds, partly degraded humus and soil microbial life which, by itself, can weigh up to 3 tonnes per hectare. All the humic compounds start life as thatch which, when degraded, converts to humus and beneficial organic acids.

Thatch should more properly be called organic material, the source, when degraded, of nearly all beneficial organic matter. The chemical, physical and biological actions of soil organic matter are contained in a previous article in Pitchcare https://www.pitchcare.com/magazine/soil-organic-matter-is-good.html

So how can greens and pitches be managed without heavy disruption?

Thatch degrades easily and converts to humus in situ if the necessary fungi and bacteria are present. If the microbes needed are missing, then products containing thatch-eating fungi and bacteria have been available for over twenty years and there is a wide range of options from microbial inoculants to compost teas available to the turf manager to degrade thatch. The limiting factor in thatch degradation is usually oxygen.

The most effective way to get oxygen evenly distributed throughout the rootzone is by frequent tining with 6-8mm block tines - which hardly disrupt the surface; regular use of a sarrel roller that penetrates to the bottom of the thatch layer every 2-3 weeks will suffice. This may be augmented with slitting when moisture levels allow. 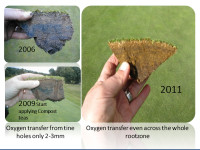 There are also a number of liquid applications that contain high numbers of oxygen atoms so, when sprayed, allow oxygen to become available throughout the rootzone

Hollow coring does not always oxygenate the soil. You can see from the pictures in figure 1 that hollow coring once or twice a year has very little effect on black layer. The black layer has not broken down because oxygen has only travelled a couple of millimetres from the tine hole.

However, when regular micro tining and microbiology was applied via compost teas, the rootzone became clean, friable and humus rich in the space of a year.

Nature works in several ways to create the correct air and water spaces in the rootzone.

Bacteria and fungi produce polysaccharides to help them adhere to surfaces and to prevent them from drying out. The polysaccharides are sticky substances which clump fine soil particles together, forming air space in between.

Nematodes often get a bad press from turf managers, but very few are plant parasitic. Most live on bacteria and fungi or other nematodes.

Nematodes play an important role in soil improvement. They are larger creatures up to 0.5mm long and, as they move through the rootzone, they push soil particles apart, depositing ammonium as they go. Root hairs then colonise the space and further improve friability.

Earthworms, most of which do not form casts, also create wide air spaces and drainage channels.

Thatch is mostly lignin which needs fungi and actinomycetes to digest it and break it down. Without fungi, dilution with sand will have a very limited effect. You can see this from the pictures in figure 2. A green with very deep, dense thatch was hollow cored twice a year for two years and 200 tonnes/hectare p.a. of sand applied. With almost no positive result. After two years, the greenkeeper switched to a biological approach. He applied thatch eating fungi, stopped hollow coring, reduced sand inputs to 120 tonnes p.a. and tined every two weeks with 6mm block tines. After two years of this regime, the thatch had almost completely gone leaving an aerated, friable rootzone.

To maintain healthy, free draining rootzones, you need a minimum of 2-2.5% w/w humus or humic compounds and, until the thatch is completely mineralised, which can take up to 30 years, humic compounds show up on the loss on ignition test to measure "organic matter". 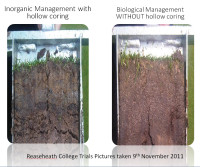 The positive effect of humus cannot be overemphasised. It turns the rootzone to a rich brown colour, so it is easy to see if you have enough.

Figure 3 shows the final results of a trial conducted by James Grundy when teaching sports turf management at Reaseheath College. The pictures were taken two years into the trial. The rootzone on the left has been managed with inorganic fertilisers (kindly provided by ALS) and hollow cored, aerated and topdressed in accordance with average greenkeeping practice. The rootzone on the right was managed with mostly organic fertilisers; compost tea was applied every month in the growing season and aeration was limited to solid tines and sarrell rolling.

The conventionally managed rootzone still has a lot of compaction, deep thatch, locked up nutrient, layering, root breaks and anaerobic conditions and is not at all conducive to good grass growth. In comparison, after just two years, the rootzone on the right, with applied biology, has converted the thatch to humus, the microbes have opened up pore space for air and water, locked up nutrients have been made available for grass growth, the layering has gone and roots can grow throughout the rootzone.

In our tough financial climate, when golfers and sportsmen demand the highest standards with minimal disruption, managing in the most cost efficient manner is paramount.

If we take a look at the savings made when managing healthy soil, we can see that savings on 100 tonnes or more of topdressing a year, the reduced investment in machinery and blade maintenance, reduced course or pitch closures, more efficient use of man power, reduced fungicide use and more green fee income taken together will make a sizeable improvement to almost every club's finances.

Six years ago, I applied Thatch Eater and started introducing biology into the rootzone. The next year I moved on to applying eight to ten applications of compost tea each year.

This process has shown amazing benefits as we have not hollow cored, scarified or verticut the greens over this time, with no negative effect, and the thatch degradation continued.

We replaced the above procedures with regular aeration in the form of 6 or 8mm solid tines and weekly star slitting or sarrel rolling, combined with brushing and rolling. We are now achieving green speeds of 9.5 to 12.5 at a cutting high of 4 to 5mm, with excellent firmness and trueness. The figures speak for themselves.

In 2015, we applied 34kg of nitrogen 3 fungicide applications and 50 tonnes of topdressing sand.

Over the last few years, one fungicide application has been the average. 2015 was a high disease pressure year and we applied one preventative and two curative.

I started working with soil biology eighteen years ago and noticed continuous improvement in rootzone quality. Twelve years ago, we stopped hollow coring and reduced topdressing to 60-70 tonnes p.a., sufficient to create a good playing surface.

Aeration is now carried out by regular sarrel rolling, solid tines every 6-7 weeks and vertidraining every 18 months, plus slitting in winter.
Since starting with compost teas four years ago, drainage and firmness have both improved considerably, to the extent that, even in the wet north west, the greens are now playable almost all year and our members are very pleased with the lack of disruption to play.

Course closures are now due to waterlogged fairways and surrounds. It is also worth noting that I have only had to apply one fungicide in the last three years and perennial grasses have colonised all the drier greens.

Here at Gleddoch Resorts, we faced problems which are typical of clubs in the west of Scotland. More extreme weather and higher rainfall was shortening our already limited playing season, whilst members and visitors were demanding better putting surfaces and less frequent disruption to those surfaces.

In 2009, we started applying microbial products to improve our Soil Biology. In 2010, we took the decision to focus our attention on degrading "thatch" or excess organic material.

2010 was the last year we hollow cored any of our putting surfaces and, since then, we have reduced our organic matter levels by an average of 30% across our greens.

Despite some of the wettest years on record, from a position where we would have only a handful of greens in play during the winter, we now have playable surfaces all winter long. Throughout the year, our greens are now more capable of dealing with heavy rainfall and remain playable or recover to playable conditions more quickly than previously when hollow coring was the preferred method of drainage management. 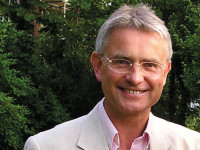 Symbio is dedicated to researching solutions to restoring the natural biological activity in soils and growing media essential to ensure the long term sustainability of food production and amenity plant resources for the world's increasing population.