0 Holly takes to the wheel as Lely's Marketing Manager 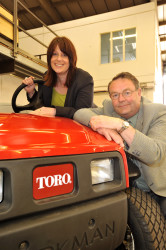 Existing employee Holly is stepping into the shoes of Bruce Dawson, who is retiring from his role as marketing manager after 35 years of service.

With five years' first-hand experience of the Lely business under her belt - most recently in sales support for the irrigation division - Holly believes that this insider knowledge together with her natural passion for marketing will help her hit the ground running.

"I'm thrilled to have been appointed marketing executive," Holly comments. "I've always had an interest in marketing, seizing every chance I could to work in this area in previous roles in sales support. So to have been given the opportunity to pursue this career path here at Lely is a dream come true. I have some big boots to fill and a lot to learn, but I very much look forward to the challenges that lie ahead."

Meanwhile, Holly's predecessor Bruce is looking forward to indulging his passion for caravanning around Britain with wife Christine, as well as spending time with his grandchildren. He also plans to seek voluntary work come winter.

"I'm very much looking forward to my retirement and take with me a lot of fond memories of my time at Lely," he says. "I wish the company, my former colleagues, and in particular Holly in her new role as marketing executive, all the very best for the future."