by Tom Rhodes
in Football, People, and Machinery & Mechanics
on 16 Feb 2016 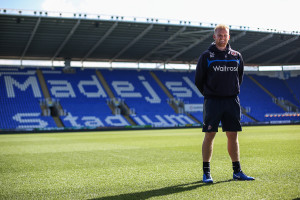 When the top job at Reading Football Club became available, Adam Grantham was perfectly placed to take on the role. His twelve year association with his home club means he is now a key player as the Championship side push for promotion to the top flight

Being a key player for your hometown football club is the pipe dream for many football fanatics when growing up. For Adam Grantham, Grounds Manager at Reading Football Club, that dream is very much a reality. Although Adam prepares the Madejski Stadium turf rather than plays on it, he is still instrumental in the day-to-day running of an organisation that holds deep personal value to him.

When the long time head groundsman, Bruce Elliot, moved to then Premier League side Fulham, the reigns were passed to his assistant, Greg Bolton, who took over as head groundsman at the stadium, whilst Adam became head groundsman at the training ground. When Greg moved on to Fulham, following Bruce's eventual move to Crystal Palace, Reading created the role of Grounds Manager, and so the top job had opened up for Adam.

After an association with the club of over twelve years, he now heads up a team of eleven full time groundcare professionals. Adam's remit means that he is not just responsible for the first team stadium pitch, a Desso surface, but also the club's 6.3 hectares of pitches at the Hogwood Training Ground, where the daily maintenance responsibilities lie with Head Groundsman Scott O'nyons and his team, resulting in first rate training pitches that allow the Championship club's academy to compete with the likes of Arsenal and Chelsea in the Professional Development League 1.

The quality of the training pitches is fundamental in order to achieve such a feat, as all academy facilities are independently audited to reach the FA's rigorous Elite Player Performance Plan (EPPP) protocols; something that is a significant achievement for a club that does not wield the same financial clout as the Premier League big boys. This elite status allows Reading to nurture some of the game's best talent and, although the club isn't always able to keep hold of the players due to the inevitable lure of top European clubs, the academy holds strong financial value for the organisation, whilst also challenging the status quo of the game.

Adam's contribution to the success of Reading FC's academy facilities is a clear endorsement of his ability, but it is his success at the 24,400 capacity Madejski Stadium that is all the more impressive due to the challenges he faces there - with the biggest challenge to the turf coming in the shape of the London Irish Rugby Club.

London Irish began its Madejski tenancy back in 2000, moving from the more humble premises of The Avenue in Sunbury-on-Thames which, at the time, held a maximum capacity of 6,600. With Rugby Union turning professional in 1997, the demand for the sport has been growing season-on-season ever since, now with London Irish bringing in an average attendance of around 4,000 per game, they are a vital financial draw to the stadium and to the Reading FC owners.

Rugby, as a collision orientated sport, poses significant wear and tear on the turf due to higher impacts and use of studs to grip the playing surface during scrums. This can cause issues with the 'carpet' required for professional football games, as the requirements are clearly very different.

Adam isn't alone in having to provide a professional quality playing surface for both sports, and other examples include Coventry's Ricoh Arena, which hosts Coventry FC and Wasps, Hull's KC Stadium is used by both Hull City FC and Hull FC Rugby League, and Swansea's Liberty Stadium has to cater for both Swansea City and Ospreys.

"I will have a team in place when we have a double header weekend of football and rugby," confirms Adam. "First, the pitch is restored using Dennis G760s with brush cassettes and mown with Honda rotaries to clear debris and leave a good presentation The football lines are then scrubbed out by hand and the rugby lines marked out. We'll divot the pitch as required."

With Irish signing a tenancy extension at the Madejski until 2026, they will be at the stadium for the foreseeable future and, as Adam continues his passion for the industry and the club he has supported from a young age, he will continue to provide a top quality surface for both games.

"My aspiration for the Madejski pitch is for it to be viewed as a great football surface in its own right, not just as a good football pitch that has to contend with hosting rugby games." Adam explains. "Of course, London Irish play a part in our success as an organisation and I do enjoy us hosting their home games here; however, as a groundsman and a football fan, you are bound to get more satisfaction out of creating a surface that allows the players to play an attractive brand of football."

"Also, it would be unfair to state that the only challenge we face at the Madesjki is the rugby games. The 'bowl' structure of the stadium means that we constantly require the use of our SGL lighting rigs at the south end of the pitch, to ensure the grass is strongly rooted and healthy, ready for the winter months."

"With this in mind, making sure we have the turf in peak condition in late October and early November is essential to the success of the season - if the whole pitch is not as strong as possible by this point, it can create a significant threat to the surface for the remainder of the season. Of course, the weather plays a huge part in this process also, as that can dictate when we are able to spray and fertilise the turf. We have set programmes in place for both sites."

"During the summer months, we cut at 25-26mm whilst, for the autumn and winter months, it is raised to 28-29mm. Premier Pitches carry out our renovations for both sites."

"The stadium pitch is a full Desso GrassMaster® construction and has to cope with three solid weeks of corporate games once the season has finished. Renovations usually begin at the end of May, first week in June. We killed off the pitch with glyphosate ten days prior to koroing to expose all the Desso so that it was all nice and clean. It was then agitated with a Restorake to 'fluff it up' to create a nice fine tilth. It was then sand dressed with 60 tonnes of Mansfield MM45, seeded and a pre-seed fertiliser added."

"We put the Air2G2 across the pitch and then put on the germination covers for around ten days. Once removed, we started our regime of rolling and cutting with the Dennis G760s, just to tip the top off to strengthen the plant, and then moved on the the Honda rotaries once the sward had thickened up. We find that, if we use the rotaries too soon, they have the affect of sand blasting the plant, so timing is important."

"The match pitch at the training ground was sprayed off with glyphosate ten days prior to being koroed off, cultivated at 100mm with 100 tonnes of fibre concentrate being put back on to the final level surface, seeded with Limagrain MM60, followed by final rolls and a pre-seed fertiliser applied."

"The under 21s and under 18s pitches were also killed off with glyphosate ten days prior, followed by 100 tonnes of Mansfield MM45 dressings going on, Limagrain MM60 seed, and final rolls and pre-seed applied."

"The academy pitches were not killed as they were only fraise mown to the crown of the plant to rejuvenate them. Barenbrug RPR seed had been applied at last season's renovation. Following fraise mowing, these pitches were topdressed with MM45 sand, seeded with BAR 7, rolled and a pre-seed applied."

The machinery Adam and his team deploy on both the Madejski and the training pitches also plays a big role in the quality of the turf and managing the demanding workload the Reading FC groundcare staff face. The team use Kubota tractors and mowers through a twelve year relationship with Kubota dealer Lister Wilder, which includes servicing, maintenance and new product training; all of which is overseen by Lister Wilder's Stuart Venn Dunn.

"We use the Kubota machines for a wide range of applications, here at the Madejski and back at the training facilities. For example, we use the B2530 tractor as a general workhorse at the stadium, shifting the artificial lighting rig, trailing and pulling other pieces of kit, whilst the L3540 is only deployed at Hogwood, spraying all of the training pitches and making use of the hefty front loader attachment."

"A great strength of Kubota machines is their reliability." Adam states. "All our models very rarely break down, and the support from Lister Wilder means that, if we do have a problem that we can't deal with ourselves, it will be resolved quickly and the machine in question will be back at work, so minimal productivity is lost. This is essential to our day-to-day operations, as with responsibilities also requiring us to prepare the Reading FC Ladies pitches over at Farnborough Football Club, we can't afford for time to be wasted."

"What is also pleasing is that the Kubota machines always seem to be progressing in terms of power, fuel efficiency and operation qualities. The new Kubota B3150 is proving a real hit with my team, as it is easy to operate and can deliver excellent results with the 5m brush attachment and the front loader frame."

"Another benefit of the new B50 model is the minimal impact it has on the turf. The players can be fussy about turf damage, which is why we requested the extra wide tyres for the model. That, coupled with the Bi-speed Turn (which is unique to Kubota), means we can carry out work without affecting the playing surface."

"The loyalty we are displaying with Kubota is due to the machines doing a good job year after year, with the excellent service Stuart and the Lister Wilder team are providing us." Adam closed by stating: "As long as I'm Grounds Manager here at Reading FC, I can't see us going anywhere else."