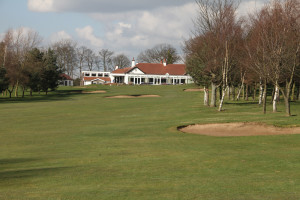 In times of austerity, golf clubs have to watch the pennies but, more importantly, with nomadic golfers becoming the norm, change the way they operate to retain membership and encourage the next generation of players to take up the game.

So, any golf club that continues to invest in its course stands a better chance of survival. One such club is Wakefield Golf Club, who seem to be bucking the trend by having a thriving membership and plenty of societies wanting to play the course.

Set in the urban suburbs of Wakefield, the club was originally formed in 1891 on land known as Heath Common, but moved to its current location at Woodthorpe in 1911.

The course, in 1911, was essentially the same as today, with an anti-clockwise loop of 9 holes enclosing a clockwise loop, each returning to the clubhouse. The course is traditional parkland with soil push up greens and is maintained by a team of four greenkeepers; John Hampton, Mick Shillito, Dean Ward and Neil Barrett under the guidance of Head Greenkeeper, Damian Wormald.

Damian took over the reins a few years ago when the previous head greenkeeper retired, and immediately set about improvements on the greens, signing up to a greens monitoring programme and looking at ways of reducing the amount of salt based products being applied.

In part, this involved reducing NPK ratios dramatically (he is now applying less that 70kgs/N per Ha per year) and, instead, is now using compost teas as his main source of food for the greens, along with applying an assortment of organic based materials, that include fish guts, seaweed extracts, humic and fulvic acids.

Damian has been brewing his compost teas for four years now, using Symbio tea bags and an assortment of additives, which he applies on a monthly basis. He has a 200 litre brewer and it only takes two days to produce a new brew. Day one sees him fill up the brewer with clean water, switch on the air pump and allow the water to circulate for a few hours. The next day, he puts in his tea bag and adds other organic materials, allows it to brew for twenty four hours and then decants into a sprayer ready for putting on the greens the following day. He will often re-use the tea bag to make another brew for the tees.

His feeding programme usually starts in March with an application of lawn sand to kill off the moss and improve vigour and colour. He will then apply hoof and horn as a base feed in mid to late April, and again in June. At the back end of the growing season, he applies an NPK 3:0:3+fe feed. 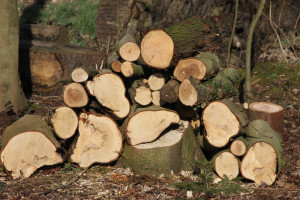 Damian does not use growth retardants, but relies on a good cultural programme of aeration, verticutting and topdressing to help enhance sward health. He cannot remember the last time he sprayed a fungicide on his greens, and not having to purchase fungicides and growth retardants has resulted in financial savings.

Greens are aerated twice a year using a deep tined verti-drain, which is complemented by regular slitting and topdressing once a fortnight with between 60-80 tonnes of Bathgate Moist 28 sand. However, the greatest change has been the embracing of the latest green technology in the purchase of pedestrian and ride on Jacobsen Eclipse electric mowers.

His first purchase was January 2013 when he took delivery of three Eclipse2 battery-powered, pedestrian mowers, the first in the UK following the introduction of the refreshed former Eclipse 100 series earlier that month. He was so impressed with their performance that he has now added the ride-on version, an Eclipse 322, purchased from local Ransomes Jacobsen dealer, Golf and Turf Machinery.

Not only has he seen savings in fuel, he is able to cut much earlier in the mornings without making too much noise. "We are really impressed with the intelligent feedback you get from the machines," says Damian, "and the ability to alter the frequency of cut. We've really experimented with this function, in all conditions - wet, dry, warm and cold - and have found the optimum for our greens. This helps us to keep them stimping between 8.5 and 9, which is probably the optimum for the majority of members here. We use the Eclipse2 with groomers to control the invasive Yorkshire Fog and we've not had to use temporary greens at all this winter."

Damian can set the mowing speed through a PIN-protected menu on the Eclipse2's 'In Command' control system. The transport speed has also been increased to 8km/h (5 mph), making it quicker to move between greens, whilst counter-balance springs in the handle ensure that the cutting reel sits true on the turf when the operator grasps the handle.

"Being able to set and determine the speed of the mower, along with setting its clipping rate, means that whoever uses the mowers, the speed of operation and clipping rate will remain the same on all three mowers, hence the greens are being cut consistently," he continues.

They set the greens mowers at 4.5mm and run at this height throughout the playing season, with maybe a lower setting of 4.25mm for competitions and, once the season is over, increase to the winter height of 7mm. With the recent purchase of the ride-on Eclipse 322, Damian now has the ability to achieve a consistency of cut on all 18 greens, all year round. He uses the pedestrians from October to May and the ride-on from June to September.

Spring renovation of the greens involves micro-tining to 40mm, then topdressing and overseeding with a 70/30 bent fescue mix.
Damian also uses a turf iron in between his cutting regime to help maintain green speeds and improve smoothness; however, the rolling programme is heavily dictated by the weather. 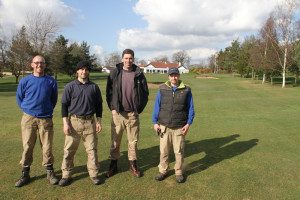 The staff have also been busy during the winter months thinning out plantations and woodland areas, including the removal of conifers and laurels, opening up these areas to improve sight lines, air movement and, additionally, increase biodiversity around the course.

Other major winter work has included the building of a brand new first tee and putting green, which is due to open in June, and the next project is to install a washdown facility using recycled water from the roof of the clubhouse.

Damian ensures his staff are well trained and are able to carry out most of the work themselves, thereby reducing the need to bring in contractors. "It's all about making good use of the resources around you and being in tune with the needs of the course and its members," he concludes.