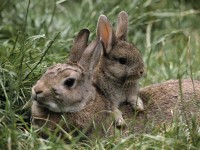 It's not difficult to understand why rabbits are loved by children. I suppose the blame lies clearly at the feet of Beatrix Potter, Walt Disney and the like. Even Richard Adams' gruesome Watership Down had the 'aaaah factor' as the little critters ended up living happily ever after. And then, of course, there is Bugs Bunny!

In the second of a series on pest control Andy Bedoes, of ABComplete Pest Control, looks at the methods available to keep Thumper and his pals off your land!

Contrary to popular belief, rabbits are not rodents but Lagomorpha, a family made up of rabbits and hares.

agomorphs have two pairs of upper incisor teeth, the second pair being directly behind the front set. These teeth grow continually throughout the life of the animal and need to be kept at the optimum length. Therefore, rabbits must gnaw at hard surfaces to wear them down, and this is the reason why trees and fence posts are gnawed. Unlike rodents, who are prone to eating almost anything, rabbits are herbivores and feed on grass, weeds and other vegetation.

Rabbits are not native to the UK. It is thought that the Romans and Normans brought them here as a source of meat when hunting larger wild animals was difficult. They were kept in warrens allowing them to be farmed. Our population of rabbits are descendants of escapees from these warrens.

A black rabbit in a population is generally the sign of interbreeding, often these colonies will suddenly disappear as the whole colony has no resistance to disease.

When farming became better organised in the 1800s, and winter feed became available, the population exploded and, other than a period in the late 1950s when Myxomatosis (or Myxi as it is commonly referred to) was rife, the rabbit population has steadily increased.

The Myxi virus is transferred by insects and fleas but, since its first devasting introduction, rabbits have built up an immunity to the disease. It appears that Myxi has the ability to change its structure to combat this immunity, and a particulary virulant outbreak in south east England in autumn 2000 devasted the rabbit population.

In the UK it is now an offense to deliberately transfer Myxi. In Australia it is still used as a widespread form of control.
An adult rabbit weighs between 1-2kg and eats up to 600 grammes per day. Ten rabbits will eat as much grass as one ewe.

The gestation period is approximately 30 days. The kits are weaned at five weeks and females will be in breeding condition at just 3-4 months old and giving birth to an average size litter of five. Each female can breed up to five times a year if the conditions are good. Therefore, one female and her offspring can be responsible for producing thousands of rabbits in a season.

This capacity to reproduce makes control difficult and, according to Defra, the aim of control should be to reduce numbers to a level at which damage is economically acceptable.

The legal implications for control of rabbits come under the 1954 Pest Act which makes the occupier of the land responsible for the control the rabbit population.

If rabbits on a neighbour's land are causing serious damage, and discussions with them fail to resolve the problem, you can refer the matter to Natural England's Wildlife Management and Licensing Service.

Where a complaint is justified, Defra and Natural England have powers to require rabbit control to be carried out. If this is not done, it may arrange for the necessary work to be undertaken at the expense of the occupier, who could also be liable to a fine.

Rabbits do not respect boundaries, so the most effective results will be achieved if control is also undertaken on adjoining land at the same time. 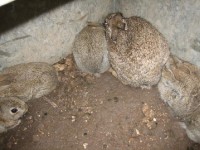 There are a number of control methods. These include: shooting, ferreting, traps, nets, running dogs, birds of prey, fumigation and repellents.

None of these methods on their own will remove the whole rabbit population. The only real way to keep rabbits out is fencing. A combination of the legal control methods will most definitely reduce the numbers.

To make the most impact on a population the best time of the year to target rabbits is November through to March. This is when the population will be made up of breeding adults and serious inroads can be made into the breeding stock. Long netting and shooting at night or ferreting with long nets in the day will also put a serious dent into the numbers.

Shooting is best undertaken at night with the aid of a high powered lights. However, if night shooting is carried out on a regular basis, the rabbits will become "lamp shy" and difficult to shoot.

By combining shooting, netting, trapping, ferreting and fumigation populations can be kept at a suitable level.

We ferret and shoot throughout the year to keep the balance between the rabbits and damage caused by them and us to a minimum.

Fumigation must be the last option as you are required, by law, to use the least toxic method of control. The product available for fumigation is Aluminum Phosphide which can only be used by those that have been trained in its safe use. Fumigation will only work if it is a thorough treatment where ALL of the open holes are treated, including those deep in bramble bushes.

A word of warning! There is a piece of equipment on the market that is supposed to be 'the definitive answer' to rabbit problems. The principle is to put a propane and oxygen mix into the rabbit burrows and ignite the gas. This method is illegal under the Wildlife and Countryside Act as it is an offense to kill any wild animal using explosives. The suppliers of the equipment try to get around the law by saying the explosion will collapse the tunnels. It won't, so don't get caught out on the wrong side of the law with this one as it simply isn't effective.

We have been having some really good results with a taste aversion repellent called Rezist. It is for professional use only.

It is sprayed on to feeding areas and makes the site unattractive and helps to keep it clear,

Rezist causes no problems with grass and it also works with Canada geese, moles, foxes and other mammals that enter the area. It is not likely to be 100% effective, but should offer a significant reduction in pest activity.

Treatments with this product should form part of a planned and integrated programme which may also include standard pest control measures as mentioned previously. It should be seen as an opportunity to significantly enhance current methods, not replace them entirely. Specific areas, such as greens, tees, football pitches etc., can be treated regularly. This will move the pests away from the playing surfaces out to the fringes.

Drop traps along fence line and boundaries will regularly take a dozen rabbits in a night if they are positioned correctly, rabbit snares can quickly reduce numbers if they are used by someone experienced in there use.

If you are using live catch cage traps always face the trap in the direction the rabbits will be coming from as they will have either fed or be in a hurry when they are on their way back. Ensure the bait in the cage traps is refreshed daily so it remains attractive. In the past we have used parsley in flower pots to catch some wary rabbits at a golf course.