As an ex Local Authority Manager it always pleases me to see well maintained council facilities. That was certainly the case when I visited Bollington Recreation Ground in Macclesfield, Cheshire.

The reason for my visit was to meet up with Bollington Cricket Club's groundsman, Jimmy Yea, and their chairman, Chris Murray. Jimmy had been nominated for this years Cricket World/Pitchcare Groundsman of the Year awards.

This summer the club currently play in Division 2 of the Cheshire County League, but have now secured promotion to Division 1.

Having played in the Cheshire pyramid system for many years Bollington were promoted to the County League seven years ago and have had spells in both the First and Second divisions during that period. Their ambition is to achieve Premier League status.

The club play at the recreation ground, owned and maintained by East Cheshire Council. They have worked very closely with the club to provide high quality facilities for local cricketers, successfully bringing young people through the ranks to represent the county, including Katie Paterson, the current Cheshire Juniors ladies captain. Many a male cricketer has been impressed with her ability to 'flatten their stumps!'

Bollington CC is Clubmark accredited and runs three senior sides, a Veterans team and juniors from under 11 to under 18. Club membership stands at over 150. 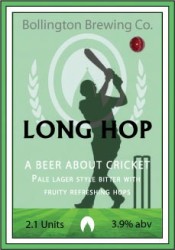 The club continues to improve and, in the past two seasons, has invested in a complete renovation of the outdoor nets, purchased new covers and a new electronic scoreboard. Future plans include replacement of the sight screens and the purchase of a water hog.

Much of this is possible thanks to a two year sponsorship deal with the Bollington Brewing Company. In addition to the sponsorship, the brewery also provide the teas for all home games courtesy of their catering facilities at the Vale Inn, adjacent to the ground. The sponsorship has even led to the brewery's latest ale being named 'Long Hop'. Needless to say post match celebrations or 'drowning of sorrows' also take place at the Vale!

Chris Murray says that much of the club's success can be put down to the hard work being done by Jimmy and his colleague, Sam Newton, the gardener. Both are employed by the council to work at the recreation ground on a full time basis, maintaining both the gardens and the sports facilities.

Both have attended college and acquired qualifications in horticulture and sports ground practices. Jimmy gained a National Diploma in Horticulture, specialising in Sports Turf (triple distinction), at Reaseheath College in June 2007.

He is solely responsible for the square and outfield, working closely with his council line manager and Chris who represents the cricket club.

The outfield is cut twice a week during the season leaving the clippings to fly to provide nutrients. Out of season it is cut as dictated by grass growth.
It is scarified in March and lightly rolled once a week in the pre-season. It is slit once every other month. Fertiliser is rarely used.

Machinery used on the square include a Dennis mower with fine cut cylinder and interchangeable light scarification cassette, a Ransomes Matador and a 1969 three tonne Autoroller.

The square consists of thirteen wickets and has to accommodate over eighty fixtures a season, a fairly heavy schedule.

Wicket preparation begins ten days prior to a match. The senior wickets are lightly scarified immediately before and after a match. The initial cut is at 5mm gradually reducing to 2mm. Each wicket is lined out with string to ensure straight edges.

They are mown every two to three days and rolled up to three times. During hot weather the wicket is lightly watered, but no later than four days prior to a match. They are marked out the day before a match.

The square is mown twice a week at approximately 8mm but, by May, the height is reduced to 6mm.

The cricket ground is situated in a Green Flag accredited park, an award presented in June 2008. Therefore, fertilising is kept to a minimum as the use of chemicals is strictly limited. Currently, seaweed based fertilisers are being used as they contain a high level of organic biostimulants and are, therefore, environmentally friendly. Fertilisers high in potassium and phosphorous are used as they boost root growth essential for cricket turf. Once, during the season, a fertiliser high in nitrogen and iron will be applied to boost the grass leaf blade.

Should any disease occur, it will be spot treated; a full area spray is only carried out if absolutely necessary, and only after full consultation with management. Heritage is the fungicide currently used due to its environmentally friendly makeup.

Herbicide treatments are kept to a minimum, at most employed twice a year, preferring to scarify as an effective alternative.

Wickets are repaired by soaking to allow the clay to expand. The barer areas are heavily raked to loosen the soil and then sown and lightly topdressed.

For larger divots, pre-grown grass is placed in the divot holes and lightly pressed in, applying a small amount of pre-seed fertiliser and keeping the areas moist to encourage germination.

This is is the most important time of year and sets the standard for the whole of the following season.

Renovation begins the week following the last game of the season, usually mid-September. Firstly, the square is deeply scarified in at least two directions.

When Jimmy arrived a few years ago the square was suffering from a deep thatch problem. To combat this the whole square was hollow tined at differing depths, this was repeated annually until the thatch was reduced to an acceptable level.

Loam containing only 28% clay is used to aid drainage, which has become an issue during the recent wet summers.

Currently, Jimmy has a problem with saddles on the square. Due to the limited funds available, for the past two years the saddles have been repeatedly hollow tined, rolled and tined, with the aim to diminish them over a period of time.

After the square is tined it is overseeded with a perennial ryegrass mix and then topdressed. The square is then dragmatted to provide as even a surface as possible.

Out of season, soil samples are taken to determine the nutrient levels and balance in the soil, which allows the correct amount of fertiliser to be applied.

The square is vertidrained in mid-November to ease the existing layering problem, relieve the summer's compaction and introduce some much need oxygen into the soil profile.

Weather permitting, the square is mown and kept to a height of approximately 15mm.

Again, weather permitting, light rolling may commence in late February. The heavy roller is only employed 2-3 weeks prior to the commencement of the season. Rolling is always performed in a Union Jack pattern to ensure even consolidation. Mowing is also carried out in this pattern as this encourages tillering of the ryegrass plant. The square is scarified in at least two different directions to eliminate as much of the winter build up of dead material.

Bowling green: Well used by nine teams from two different leagues. Cut at a height of 3-5mm during the season, constantly checked for disease (which would be treated with environmentally friendly products), scarified regularly and kept to a very high standard.

Tennis courts: Two newly surfaced, high quality courts surrounded by trees. These are brushed free from leaves and debris daily to protect against moss and algae build up.

Football field: This is maintained by other council staff who regularly mow, fertilise, slit, harrow and roll, shockwave slit, overseed and topdress. It is considered to be a very high quality local authority pitch.

During the summer months ongoing maintenance is typically: litter bins are emptied on a regular basis and there is a daily litter pick; the pavilion and outbuildings are inspected; the pathways are brushed and blown free of debris.

The newly turfed areas are mown and strimmed, as are the Victorian grass steps. The bases of walls, obstacles and fencelines are all strimmed, with hand weeding of herbaceous beds, rockeries and flower beds (chemicals are forbidden here).

Paths, driveways and shrub beds are edged off, summer and winter planting of beds and planters, deadheading summer flowers and ornamental hedge cutting

In the winter, in addition to general maintenance work on the cricket square and bowling green, Jimmy and Sam remain responsible for litter, keeping pathways clear, checking the pavilion and outbuildings and also cleaning out grids.

Hedge cutting and shrub pruning continue and, then, no sooner is it time to begin preparations for cricket and bowling again. This will include rolling and painting the surrounding boards for the bowling green

It was good to see the park in such capable hands. Jimmy's dedication and commitment is clear to see. There is a good communication structure between all parties and, importantly, a local authority with the desire to deliver much valued local services.