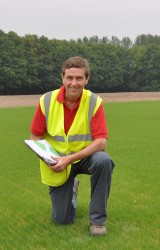 Speedcut Contractors have found this one of the most 'horrendous' weather years on record - but are completing a busy round of sportsturf jobs despite the dreadful summer and autumn rains.

"It's certainly a question of dealing with jobs according to the weather patterns," says contracts manager Kevin Smith. "The wet weather has been horrendous this year and we have completed jobs as and when we can.

"The rain has played havoc with our work patterns but we have been meeting the demands of clients by switching between jobs according to the ground conditions."

Among the projects halted by the wet weather is the re-construction of two new pitches for Swansea Rugby Club.

Says Kevin: "The weather has certainly influenced the progress of this contract, which will not now be completed until next year."

While the weather has been a nightmare this year," says contracts manager Barry Pace, "we have managed to complete a wide variety of sportsturf construction and renovation jobs by working between weather fronts and by being vigilant not to create undue damage to areas.

"This has certainly been one of the toughest years as far as unpredictable weather is concerned - and another big challenge contractors have to face. Patience and bravado have been two key words to describe the best way to deal with this weather when time has allowed."

Speedcut managing director Dick Franklin, who founded the business at his Oxfordshire base in 1977, says: "The weather this year has been the worst on record for contractors but we have been pleased with the results we have achieved on a wide variety of sports surfaces despite the challenges."

In Kent Speedcut constructed new tees, artificial pathways and installed drainage at the historic Chislehurst Golf Club and nearby at Sundridge Park Golf Club they built a new driving range, dredged and re-shaped a pond for a new bridge and walkway and relocated and levelled tees.

Moor Park Golf Club in Hertfordshire had an old wetland area completely dredged and deepened while at Gerrards Cross Golf Club in Buckinghamshire, working with William Swan of Swan Golf Designs, Speedcut have started on improvements to the practice area with a new chipping green.

Speedcut's Gwazae deep-probe aerator was in action at Royal Windsor Racecourse following IOG Saltex - decompacting the track where the temporary crossovers were situated. They also treated other areas of the course.

Heavy rainfall during the year has led to an increase in requests for Gwazae treatment and winter treatments on greens and pitches will start shortly.

A pre-school play area artificial grass area was installed for St. Hugh's School at Carswell, near Oxford, where new rugby and hockey pitches have also been sown down in the last few weeks.