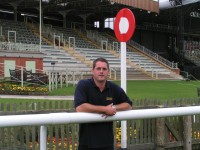 Newmarket Racecourse is a legend in horse racing, with a history going back to the 17th century. But, although its famous courses have remained virtually unchanged, it is the thoroughly modern, sophisticated and meticulous turf management that produces the finest flat racing in the world.

At the end of August, Newmarket hosted a unique three mile and six furlong race, in which amateur riders competed for, amongst other prizes, a box of Newmarket town sausages. Called the 'Town Plate' as, originally, the winner received his sausages on a plate, the race has been running once a year for almost 350 years.

King Charles II, who instituted the 'Town Plate' by Act of Parliament and contested the race himself, was passionate about Newmarket. He relocated his entire court to the town twice a year and used to watch the races sitting on his trusty hack, Rowley, after whom one of the courses, the Rowley Mile, is named.

Renowned worldwide as the 'Rolls Royce' of racing and the jewel in the Jockey Club's crown, Newmarket boasts 28 hectares of racing surface over two courses. The Rowley Mile hosts racing during spring and autumn, starting with the Craven meeting in mid April and ending with the final meeting of the year during the last weekend in October. From the end of June to the end of August, the Rowley Mile takes a break and racing is transferred to the July Course. Both courses can be extended by using the Beacon, an extra ten furlongs of track, for longer events.

Amazingly, whilst off track facilities have developed, expanded and changed beyond all recognition since the reign of Charles II - £10 million was invested in new amenities for the July Course alone in 2006 - the actual race tracks have not been altered in terms of position or length since the day they hosted their first races.

What has changed is the maintenance and turf management of these famous grass surfaces, which enables an intensive schedule of thirty-eight race days per year on surfaces that are as good as, if not better than, any in flat racing.

"We pride ourselves on producing an excellent racing surface," says Michael Prosser, Clerk of the Course and Director of Racing. "The Darley July Cup is recognised as the best sprint in the world, and last year attracted horses from as far away as Australia. We invest time, energy and money to court the best sprint horses in the world." No pressure, then, on Alan Hatherley, promoted to Estates Manager two and a half years ago and responsible for every inch of track and paddock at Newmarket.

Like many turfcare professionals at the top of their game, Alan reached his current position via a roundabout route. Born in Bishop's Stortford, he started his working life as a greenkeeper, before moving to Guards Polo Club in Windsor Great Park, simply because the job involved working around horses.

"I've always loved horse racing," he says. "None of our family has ever ridden, but I can remember first coming to the races at Newmarket when I was three or four years old. Racing was a part of our lives. We were regular punters. We'd place our bets, and we loved the excitement of a modest gamble." From Guards Polo Club, Alan moved to Windsor Race Course and, two years later, having answered an advertisement for a groundsman at Newmarket, he took the job despite the fact that, in some ways, it represented a sideways, if not backward step. "I started at the bottom and trained on the job," he says. "I don't know of anywhere with higher standards. Nothing gets missed and nothing gets left. I was closer to home, both physically and mentally. It was where I wanted to be."

Alan soon rose to become Assistant Head Groundsman and, after three and a half years, the post of Estates Manager was created and he was promoted into it. "All Jockey Club racecourses, of which Newmarket is one, have a policy of promotion from within," Alan explains. "The management spends time and money training staff and it makes sense to benefit from their experience." From Alan's point of view this policy is invaluable. "I've got a fantastic team," he says. "The Head Groundsman has been here for twenty years, there's another guy who's been here twenty-three years and, in the gardening section, two guys have been here for eighteen years. A few more have been here six or seven years, and they all 'know' the place. To put in the hours you have to do - during a three day race meeting for example - you're up at 5.00am, and you might leave at 8.00pm, or you might leave at midnight - you have to love it."

Experience, dedication and knowledge are definitely needed at Newmarket because, as well as the phenomenally long, seasonal hours, the Rowley Mile and the July Course have different maintenance programmes. This is partly due to the fact that they have different grasses - the Rowley Mile and the Beacon are predominantly fescues, bents and heath grasses, whilst the July Course is predominantly perennial ryegrass - but also because each course is under pressure at different times of the year, and needs to be prepared for its own punishing racing schedule whilst the other one recovers.

Alan has been working with Headland Amenity for over seven years, who perform in depth laboratory soil analysis every three years, with follow-up analysis annually. The nutritional programme is tweaked according to the findings. "We adjust the programme according to what the grass has taken in every year," Alan explains. "This system was in place when I became Estates Manager, it works well and I see no reason to change it. Headland are experts at the end of the day, and they don't cut corners."

Alan begins his nutritional programme in mid March with an application of Naturvigor, Headland's organic, aerobically-composted cow manure fortified by humic acid. This product stimulates microbial activity and encourages root development, and is applied to the final three furlongs of the Rowley Mile and the final two furlongs of the July Course. "As the horses are accelerating at the end of the race, they grab the surface more effectively and damage the turf to a greater extent," Alan explains. "We need strong and extensive root growth on the whole course, but particularly in the final furlongs." Also, in mid March, Multigreen 425 (28:0:0), a controlled release fertiliser activated by soil temperature, is applied to the whole of the Rowley Mile and the Beacon, while Xtend, the company's slow release product (15:2:20) is applied to the July Course.

"We give the July Course a second application of Xtend (46:0:0) at the end of May, with a view to stimulating fresh growth and improving colour prior to the start of the summer season of racing on the July Course," Alan continues. At the end of August both the Rowley Mile and the July Course receive a second application of Naturvigor to the same final furlongs as before, and the Rowley Mile and the Beacon receive Xtend (15:2:20) across all areas, to prepare them for their autumn racing.

In addition, Alan and his team have Newmarket's fine turf areas - the ornamental lawns and the parade rings - to look after. "Both the Rowley Mile and the July Course have their own parade ring, and also lawns behind the grandstand, around the bar areas, for owners and trainers," Alan explains.

"Our maintenance and nutritional programmes for all these areas are the same, starting with an application of Headland's Multiverdo at the beginning of March to encourage growth." At the beginning of April, Alan and his team apply Multigreen controlled release fertiliser, which is expected to perform as a background feed over the next four months and, at the end of the month, all the fine turf is sprayed with TriCure AD wetting agent. Turfcomplex organic seaweed is also applied at this time mainly, Alan says, to enhance colour. "We use Greentec fine turf fertiliser in the middle of May and again at the beginning of July and October to get more growth through," Alan continues. "It works well for us in conjunction with the Multigreen, which releases nutrients from April to August." Go Green granules are applied during the winter to harden the turf and prevent disease. "We want the fine turf in these areas to come into spring in the best condition possible," explains Newmarket's Estate Manager.

Newmarket is built on a silty clay loam soil, with approximately two feet of top soil above a chalk brash. "It's extremely free draining," Alan confirms, "and all the courses require extensive irrigation during a dry spell in order to maintain acceptable moisture levels."

This means more long hours for Newmarket's groundstaff who could be working from 5.00am to midnight. Alan uses two Briggs booms, a 50 metre boom on the home straights and a 30 metre boom on the Beacon Course. Newmarket has its own reservoir, fed from a bore hole, and Alan receives bespoke weather forecasts from John Kettley.

"We need as much information as possible," Alan continues. "We need to be aware of the impending weather which is, of course, vital information and will dictate how we manage the courses. We're not just talking about growing grass, we're talking about ensuring that the surface is safe for the horses. We always aim to provide the best possible racing ground."

Last year, Suffolk suffered its coldest winter for thirty years. "We experienced a significant amount of die back, with the native grass species on the Rowley Mile most badly affected," Alan recalls. "Sharp frosts persisted well into April and early spring growth was minimal. Temperatures may have risen to 15 degrees during the day, but were consistently falling below zero at night. We had to remove the die back and direct drill several areas."

At least the weeds were slow to appear - Alan finds that Cabadex helps control Speedwell - but, having to deal with the consequences of a particularly cold and late spring, whilst preparing for the first Classics of the year, the 2000 and 1000 Guineas, hosted during the first weekend in May, must have put yet one more burden on Alan and his eleven permanent staff.

In two months time, when the last race of the autumn season has run, the pressure should lessen and the team can get on with their aeration programme. "We'll utilise either a slit tine or Blec Agitator on each of the courses. This machine has 1 inch diameter tines that work to a depth of 8 inches," Alan explains. "The fissures in the soil created by the Blec are further enlarged by hard winter frosts."

The Rowley Mile, the Beacon and the July Course will lie fallow, replenishing their resources in age honoured style. And what of the horses, those world class international sprinters? They're no doubt racing off to other, warmer parts of the world. With any luck, sometime between October and March, Newmarket's Estate Manager and his valiant team will be doing the same.