0 How Koro machines changed our pitches

It's now over a decade ago since I was privileged to be introduced to the Koro range of machinery and the people involved with its development and marketing.

At the time I viewed its application as revolutionary - and it certainly was.

Thanks to those involved, we rarely see soggy Poa annua dominated pitches, slow and low cricket squares or loopy, bouncing tennis courts as we did prior to the introduction of the Koro Field Top Maker (FTM).

When we do, I can personally guarantee that the FTM has not been used during the previous close season. the machines are now widely available and the majority of sports turf contractors will have at least one or more in there armoury of equipment.

Following discussions with several leading groundsmen, and through my own observations, it became clear that not all contractors and groundsmen understood the various processes that the machine was capable of and how they could best be achieved.

Some younger groundsmen would not be aware of why the machinery was developed and have little knowledge of the desperate situation which existed prior to its introduction.

There are three main functions of the machine.

The first is to completely remove an existing sward prior to cultivation; a good example of this would be when a Fibresand or Fibrelastic pitch is to be renovated by cultivation. I would describe this as 'top off', and it would be done making two passes in normal circumstances but, in exceptional circumstances, more may be necessary. The resultant surface would be thoroughly clean and devoid of all organic residues leaving it ready for cultivation etc.

Its second function is what we describe as 'fraise topping'; this is rarely required these days but, nevertheless, I will describe the process.

Fraise topping is more or less the same as top off, but a degree of organic may be left on the immediate surface, however all herbage will be removed and, generally, there will be little or no green remaining.

Attention to detail and keeping the surface clear of debris is absolutely vital if Poa annua is to be eradicated. Poor workmanship at this stage could lead to Poa annua seeds being redistributed only to remerge in a linear fashion during sward establishment which obviously defeats the object of the exercise.

The third and the least understood mode is 'fraise mowing' which is suitable for football, rugby and cricket pitches, plus tennis courts that have a low percentage of Poa annua and a higher percentage of Perennial rye grass or smooth stalked meadow grass sward. 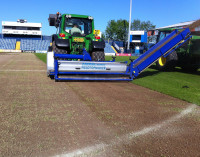 Despite what some within the industry think and say, you cannot fraise mow a Poa annua sward; it would need fraise topping or top off and then cultivating as described above.

Fraise mowing is designed to grub out shallow rooted grass cultivars such as Poa annua and leave the growing eyes of desirable grasses intact, allowing them to regenerate and create a new sward which is devoid of superfluous surface organic layering associated with the poor performance of any pitch, cricket square or tennis court. Fraise mowing a well maintained pitch or court would ideally be done with a well-furnished set of tines capable of cleanly cutting through the sward, whilst creating enough draft to pick up debris and deposit it on the belts for elevation into catching trailers.

For the correct results to be attained an in-depth knowledge is required as to the correct forward speed and depth settings relevant to the PTO speed of the tractor. Once again, a minimum two passes will be needed; the sward should be stood up by grass harrows between operations.

A successful undertaking would resemble a high class cricket wicket ready for play i.e. devoid of all organic build up, a light shade with a slight green haze. On inspection, you would expect to see the growing eye of the desirable grasses present between patches of rootzone.

When complete, the pitch would normally be topdressed, aerated, then seeded using both disc and dimple seeders, prior to being fertilised. In layman's terms Fraise mowing can best be described as ultimate scarification. 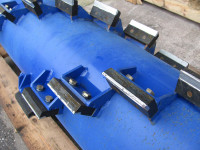 There is no doubt as to the value and success these processes have brought to the sports turf management industry over the past decade. However, we can never be complacent and, excuse the pun, 'let the grass grow under our feet'.

When working with leading groundsmen and agronomists they are constantly looking to re-evaluate and improve; sometimes it's only by a small percentage as some things cannot be altered or reinvented, but only tweaked; on other occasions, things need to be altered significantly to produce improved results.

Campey Turf Care, Koro and Imants are well known machinery pioneers with a highly respected pedigree and track record when it comes to new innovations; as such we have often discussed with them how we can look at certain aspects of equipment to improve performance and efficiency.

As ever, they took ours and other people's comments on board and developed a new generation of Field Top Maker rotors called the TerraPlane. Whilst, at first glance, the machine appears almost identical to the old model, several vital key elements have been totally redesigned, including the rotor, to improve the machines operational capabilities.

The new generation TerraPlane elevates fraise mowing to a new level. Efficiency, accuracy and overall performance have increased to deliver the client with a far superior product at the end of the procedure. We have worked with the machine for the past two seasons now and the results have been outstanding.

Surface levels are improved with no tine corrugation present; hygiene is paramount when fraise mowing and the new TerraPlane offers an unrivalled provision of surface cleanliness as it removes the remaining sward. The entire end results are superior to any previous work undertaken by the most competent operator with the best machinery available.

As a consequence, I believe that the more progressive groundsmen and agronomists will be demanding that their pitches are TerraPlaned rather than fraise mown in the future".

The development of the TerraPlane is a fine example of why we must not become complacent and reliant on existing technology. If we do, and for those who can remember the dim and distant past, we would still be talking constantly about eradicating the dreaded Poa annua and how to make water drain through thatch!