by Nick Young
in Industry News, Tennis, Rugby, Football, and Cricket
on 03 Oct 2015

0 How London's sporting venues got their names

London's sporting venues may be better known by fans for what goes on inside them, but there's often a good story attached to the names of these temples of teamwork 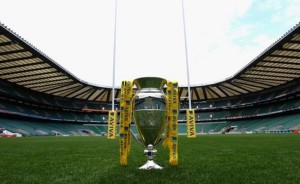 Writer Nick Young has delved into the history and found intriguing origins of monikers that include references to old manor houses, pubs, exhibitions, a couple of Queens and several mysterious Anglo-Saxon individuals.

Allianz Park
Saracens RFC's home since 2013 is built on an athletics track located in the Barnet Copthall sports complex in Hendon. Officially it's named after Sarries' sponsors, the German multi-national financial company. As for Barnet Copthall, the first part is the name of the London borough in which it is located (Barnet Council owns the land), and Copthall derives from Copped Hall, an old manor house located in nearby Totteridge that dates back to the sixteenth century and was demolished in the 1920s.

Emirates Stadium
Arsenal's new ground, which replaced nearby Highbury in 2006, is named after the club's sponsors, the UAE airline which also sponsors the cable cars over the Thames. It had been the site of a rubbish processing plant prior to the building of the new stadium and was called Ashburton Grove prior to the sponsorship deal (for sponsorship reasons, UEFA officially refers to it as the Arsenal Stadium, which was Highbury's official name). Ashburton means 'farm by the ash trees', and the only place in England with that name is a small town in Devon.

Lord's
In case you were wondering, the use of the apostrophe is correct as the Home of Cricket is named after the professional cricketer Thomas Lord (1755-1832), who founded his own cricket ground, which he named after himself, in 1787. This was part of a deal with a private members' club called the White Conduit Club which renamed itself the Marylebone Cricket Club (MCC) at the same time. The lease on that ground (now the site of Dorset Square) expired in 1810, after which Lord and the MCC moved to a new venue, only for this to be requisitioned for the building of the Regent's Canal. Lord literally took the turf with him to a third site in St John's Wood, which opened in 1814 and is the site of the present ground. It is still owned by the MCC; Middlesex CCC are its tenants.

Twickenham
The home of the England rugby union team is (in terms of capacity) Britain's second-largest stadium after Wembley. Built in 1907, 'Twickers' hosted the Rugby World Cup final in 1991 and will do so again on 31 October. The name dates back to the Dark Ages; two variants, 'Tuican hom' and 'Tuiccanham', appeared on a charter written in 704AD. The word 'ham' is Saxon and means a settlement, possibly near a marsh or a river; historians have suggested that 'Tuica' was the name of a person who lived there.

Wembley
The original, twin-towered Wembley Stadium was actually called the Empire Stadium because it was built for the 1924 British Empire Exhibition, although it had opened (and hosted its first FA Cup final) in the previous year. It was the main venue for the 1948 London Olympics and hosted the 1966 World Cup final, and for many years it had a greyhound track running round the perimeter of the pitch. The 'Empire' name appears to have been used until the early 1980s. Old Wembley was closed in 2000 and demolished three years later; the new stadium opened in 2007. The name Wembley dates back to Anglo-Saxon times; Wemba was a person who either lived in or owned the lea (meadow or clearing) hereabouts.

For the full article, visit londonist.com.