"This winter we have had growth everywhere. It has been unbelievable - we were mowing until December and started again at the end of January!"

Sandown Park is a true all purpose track, with its flagship Bet365 Gold Cup Festival in April hosting flat and jump races on the same card, and all courses converging onto one hardworking home straight.

Therefore, presenting optimum going for both flat and national hunt horses is a major challenge for Estate Manager, Craig Williamson, and his eleven-man team.

"The course is quite narrow, especially in the back straight, so it takes quite a lot of planning to accommodate chase, hurdle and flat races," Craig explains. "Watering is especially complex to meet the different going requirements. In 2011, the dry spring meant that we had to water the flat track for the Gold Cup Festival, where it is usually only the jumps tracks." 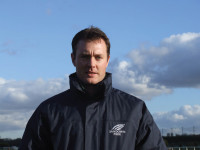 The running rail is moved for every meeting, and even between race days at a two-day fixture to give fresh ground and avoid poaching. "This means that, in February, we are racing on ground last used in November, so it is level and there may even be some grass growth, although this winter we have had growth everywhere. It has been unbelievable - we were mowing until December and started again at the end of January!"

When Craig moved to Sandown Park from Worcester in 2000, a drainage programme was about to get underway. "It was much needed - we lost the first five meetings after I started! Sandown Park used to be renowned for being wet," he comments.

The installation took four years to complete, but has proved worthwhile, with waterlogging no longer an issue. However, Craig suggests that drainage schemes need careful monitoring and maintenance.

"The home straight drains to an ancient spring fed pond which has been here since the site was a monastery, and the outlet needs regular cleaning to avoid silting up."

With a high proportion of sand, especially on the back straight, watering is an important task, with the irrigation system updated in 2008 to utilise three Briggs boom irrigators.

"This gives us peace of mind that we can get the water on, with just one operator and myself - as I live on site, I do a lot of the out of hours watering," Craig comments. "We do still use tow line irrigation on the bends as they are too tight for the Briggs, but it is a much more accurate system altogether."

Water is sourced from the mains, although a small borehole was dug when drought threatened supplies a few years ago, and provides an additional source.

Mowing takes place three times a week, and Sandown Park has recently purchased a Toro R3240T ride-on, backed up for areas such as the grass car parks by the Hayter it has replaced. 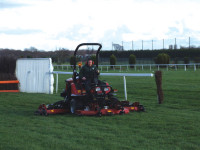 "The Toro gives a much improved cut with a more upright sward and is very productive - it cuts almost half as much again as tractor mounted mowers," Craig comments. "We have used gangs and tractors with outfront decks, but this is much tidier and gives more flexibility to cut the different areas."

With ongoing grass growth through the winter months, the light footprint of a ride-on also means that the team can keep on top of it without risking damage.

"We had 14mm of rain in the last week of January, but were still able to get on and mow."

For the mixed national hunt and flat Bet365 Gold Cup Festival in April, Craig aims to get a 'happy medium' from cut heights. Maintaining a height of 11.5cm (4.5in) through the winter keeps a good ground cover, and it goes down to 10cm (4in) for the spring meeting, before dropping to a recognised flat racing height for the summer flat season.

Craig comments that the team 'throw everything' at preparation for the April feature meeting, with a seven week renovation period after the last jumps fixture in March.

"We have been lucky this year that we could decompact in January as it was so dry, and take advantage of the grass cover. We normally do it in March, and there is always the risk of doing more damage than good."

Three quarters of the track remains to be overseeded in March, other areas have been treated over the winter as they were 'put to bed' - and this is done with a Charterhouse drill seeder, as well as manually.

A new deal with Barenbrug gives Craig access to Bar 50 SOS, a ryegrass blend formulated to germinate in low temperatures and give fast recovery from damage, and this is used to green up for the February meeting, before a return to the straight rye Promaster 79 supplied under a Jockey Club Racecourses group agreement.

"We haven't put a lot of seed on this winter as we have had only minimal damage," he comments. "And, although the Bar 50 SOS is useful for areas that need a rapid solution, most treated seed is equally good now and gives rapid germination."

Craig also uses germination sheets to get the seeds off to a good start, especially on take-offs and landings, although he cautions that they need careful monitoring to avoid yellowing and maintain consistent growth and colour across the course.

Divot mix is a Mansfield Sand 50/50, with lighter, sandier mixes avoided due to the risk of kickback. "But we use very little, just six loads in 2011," Craig points out. "The aeration work and rail movements that we do means that damage is easier to repair - there is little 'punching' and more flaps of turf that can be replaced."
Multigreen 15:0:8 controlled release prills is used over the winter, achieving sustained colour and growth.

"The release is temperature rather than moisture related, so there is no risk of a flush in wet weather, and the results have been very good," comments Craig. "We will use a spring Multigreen for April and May to give a long lasting effect, and then move to an NPK 15:5:20 before the Eclipse meeting in July, which is the highlight of our flat season."

Levelling is achieved with a light Cambridge roller, and works hand in hand with aeration and slitting to get the desired finish. "The Wiedenmann aerator suits our track and our workload well, as we would not have time to get the water on that would be needed if we open it up too much," Craig explains. 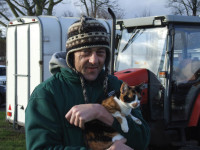 Since a restructure, Craig's team of eleven groundsmen work as one unit rather than being dedicated to estate, gardening or track which, he says, is much more efficient. "Many of the team are very experienced - one has been here for forty years, and we work well together," he explains.

Raceday casuals are essential, however. "They do a tremendous amount of work on racedays - I don't know how courses managed when you could never be sure if they would turn up or not! 'Treaders' keep the ground in good condition between the races, which is expected by the trainers these days, and also make the repair work easier by preserving the grass."

Craig was just twenty-four when he came to the course, and the role of estate manager at one of the largest and busiest racecourses in the country is undoubtedly a challenge, but one which he also clearly relishes.

Under the ownership of Jockey Club Racecourses, Sandown Park takes advantage of an exclusive supplier agreement with John Deere for tractors, and a preferred supplier agreement for other equipment, including the 'invaluable' Gators. The Toro mower is an exception, purchased at a keen price as an ex-demo machine.

"It was a bit of a culture shock when the Deeres came in, as we had used Massey tractors before," admits Craig, "But we are very fortunate - every groundsman would want a John Deere tractor once he has used them."

Sandown Park is also in a unique position as far as maintenance and servicing is concerned - agricultural engineers, A&P Services, has its base on site and looks after all the equipment. Very useful for peace of mind when a large item of kit, such as an irrigator, goes down!

Concerts and other events 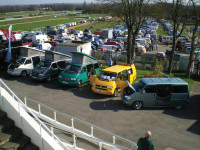 Sandown Park has been amongst the pioneers of post-racing music concerts, which encourage racegoers to enjoy the facilities once the meeting has finished and bring new fans to the sport. Fortunately for Craig, they have little impact on the turf areas as the stage is set up on the Grandstand apron with the audience on the front car park. Parts of the chase course form an overflow area for picnics and catering concessions. "There were a few problems with waste from the catering vans in the first year, but it has improved a lot!" he says.

Recent concerts have included Tom Jones and the Scissor Sisters, with toy collectors fairs, antiques fairs and classic car auctions adding to a busy events calendar. As an example, the VW exhibition, Volksworld, requires three days to get the site back to normal during the busy March renovation period, and a Christian festival, which places a marquee over the paddock for two weeks, all add to the challenge, but Craig says: "Events and exhibitions form an important part of Sandown Park's income, so it is our job to keep the estate looking good for these customers too. Presentation of the paddock and floral displays are also part of the job."