0 How to serve up a perfect grass court 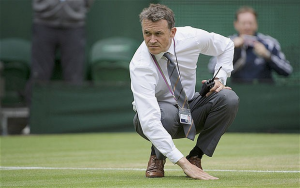 For Neil Stubley, the former chef who became Wimbledon's eighth head groundsman last year, the process of serving up a perfect set of grass courts is similar to preparing a slow-cooked, 11-month casserole.

The retirement of long-serving Eddie Seaward means that 2013 will be Stubley's first Championships in charge. Yet he does not seem overly concerned. When you have grown up feeding dozens of diners at a moment's notice, pressure is something you learn to handle.

"I spent three years working in a kitchen after I left school," Stubley said. "There are quite a few things the two roles have in common. Say you have a lunchtime menu to get ready, you can't pop up at 12.30pm and say 'Oh sorry, we will serve at 3pm.' It has to be on the table. And that's the same here.

"That's normal from my background. I find it natural to juggle six things at once and be really under pressure, because that's the nature of being a chef."

Of course, Stubley has not walked straight from the stove to the top job at the All England Club. He was only 20 when he grew tired of the heat and claustrophobia of his old role. Then he had three years' training at horticultural college, followed by 18 more on the groundstaff under Seaward.

"My first summer here was 1995, and I remember that it didn't rain once," Stubley recalled. "Whereas 1996 was probably one of the worst. We pulled the cover 21 times one day on Centre Court. We were standing in our positions all day at the side of the court while these poor women knocked up, and then it would rain again and the umpire would give us the nod."

It was around the time of Stubley's arrival, in the late 1990s, that the texture of the courts began to change. After a research programme undertaken with the Sports Turf Research Institute in Bradford, the All England Club began replacing the traditional bowling-green grasses - which were mostly bent and fescue strains - with harder-wearing rye grass.

This shift was bemoaned by Tim Henman and the rest of the serve-volley brigade. Suddenly the ball was standing up a little higher, skidding through the court a little slower, and giving the baseliners a better chance of conjuring up an effective pass.

Yet Stubley insists that, contrary to popular belief, the rye grass was not intended to alter the balance of power in this way. The improvements were brought in for the sake of durability rather than any desire to lengthen the rallies in what had become a "blink-and-you-miss-it" style of tennis.

"We are a neutral venue," he said. "We're not thinking of a particular playing style. In a football club, the manager might call for more water to be put on the pitch because it suits his team rather than the opposition. We just set out our stall and try to produce the best tennis courts we can. Then we invite the best players in the world and see what happens when they play each other.

"Every year, we try and improve our cultivars. When I started, we would have four or five days of really good courts. We're now getting to maybe day 10 or 11, so we're almost grabbing an extra week. Ultimately we would like to get through the whole fortnight that way, but whether that's possible I don't know. You find that the grass technology improves but the players are getting bigger and stronger so it kind of balances.

"When I talk to spectators during the Championships, they'll say 'How can I get my lawn to look like this?' The answer is you've got to do it full time. It's not a case of cutting it every Sunday. But I'm glad that they recognise nice lawns. As long as they think we've got nice lawns, we're on to something."

Article sourced from :-The Telegraph