0 How well do you know your square? "Before undertaking any maintenance on your square, you need to know what you are working with and understanding the science that is involved"

With the Ashes comprehensively secured, the long dark days of winter behind us and spring fast approaching, it is around about this time of year when club committees have their minds on pre-season meetings to discuss the whos, whats and wherefores of a new season.

Questions that generally come up are:
- Who's going to captain the side?
- Have we got a strong team this year?
- Any new players?
- How's the square looking?
- What will it play like?
- Will it be fast and bouncy?

In addition, the usual band of hardy part-time groundsmen and their volunteers will also be turning their thoughts to the forthcoming season. Keen and enthusiastic as ever, they will launch themselves into what seems to be the never ending passion of nurturing cricket squares, outfields and preparing pitches. A far cry from manhandling bags of topdressing, as part of their end of season renovation!

Cricket squares, and their pitches, have been the discussion in many circles by people connected with the game since time immemorial, so it is inevitable that the 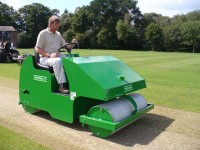 controversy over the standard of cricket pitches will continue further into time, gaining momentum, as has been the case for many moons.

Of course, to the layman - and this includes all persons not fully versed on the practising of 'groundsmanship' - their idea of preparing a cricket pitch is to approach a twenty-two yard strip of grass with a hosepipe, a bag of fertiliser, a garden rake and a mower, and, if possible, the largest, heaviest roller ever invented. Unfortunately, it is not quite as simple as that, as there's no substitute equal to living turf on which cricket is played.

Many cricket squares could well be a legacy of turf management practices and pitch preparations of long ago. Whilst realising the basic principles of groundsmanship, particularly those associated with the older more experienced gentry, follow a more or less pattern, almost all groundsmen are individuals and have their own way of maintaining their squares and producing wickets.

Most groundsmen have opinions about mowing, fertilising and over-seeding, watering, rolling and so on. But, there is a difference in the method of application and in the manner of carrying out important activities, which provide variations, for better or worse, in playing surfaces.

Throughout the history of cricket, various materials have been introduced and incorporated as topdressings into the square - peat, Nottingham marl and even slurry

have been used, in a sincere effort to improve pitch performance and surfaces.

Whilst most people would like to think that pitch problems are only superficial, and that some form of new technique will evolve to put things right, this is wishful thinking. It would be true to say that many of today's poor cricket squares will respond to a different kind of approach to maintenance practices than that previously carried out.

Geographically, every ground is different; just one distinct, negative characteristic about it would call for a careful investigation into the squares past maintenance procedures. Good, bad or indifferent, as the case may be, it is as good a starting place to solve the reasons why the pitch has deteriorated in the first place.

Cricket is based on a pyramid system - First Class, Premier League, club standard and schools - each having a different level of requirement for minimum clay content. Soil selection is dictated from the standard of pitch required, ranging from 25% of clay for schools to 35% in the first class game. 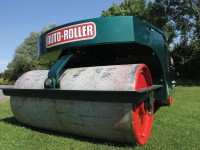 Problems that arise in the maintenance of a cricket square are the tremendous variation in the finance available to carry out the work required.

Some clubs are in a better position to spend considerable amounts of money on their maintenance whilst others have little or no money available and, therefore, only a meagre maintenance programme is possible or, in some cases, simply non-existent.

It can easily be appreciated from this grouping that, whilst all play cricket, they all have a different conception to what makes a good playing surface. Having said that, groundsmen provide the best pitch at all times, with the resources available, for which they often get little praise.

A good playing surface is dependent on good sound construction. No amount of maintenance can put right a bad construction. Before undertaking any maintenance on your square, you need to know what you are working with and understanding the science that is involved.

To do this, soil samples need to be taken from different parts of the square and be tested by an independent soil analysis company. From the acquired information you can then produce a programme of work. If you are unsure how to go about this, an ECB pitch advisor will be happy to assist.

If you do not know the characteristics of you square, i.e. construction, profile, root structure or thatch content, then no amount of rolling will be beneficial as you do not know whether you have reached optimum consolidation.

What are the requirements for a good square?

A good square requires adequate drainage, so that, when spells of bad weather occurs, surplus water can get away without too much difficulty.

The right choice of medium and heavy loams, with the right fertility and a balanced pH, so that a hard, fast, true playing surface is obtained.

The right seed mixture which contains the types of cultivars best suited to the environment to maintain growth and a vigorous root system when closely mown.

Qualified personnel - full or part time - to oversee all aspects of pitch maintenance, performance and assessments.

A good quality cricket square also requires constant attention to detail. Rushing around in the evenings and weekends is all well and good, but this alone cannot produce the exact science a square needs. Many clubs make the mistake of allowing too many people to direct operations.

Persons with qualifications would be preferred, providing a Performance Quality Standard (PQS), as a means to determine the quality of a square or pitch at any given time.

PQS is best described as a management tool, and can be used for a range of applications as well as benchmarks against which judgements are made following the assessment or measurements of your square or pitch.

This information can then be used to:
1. Improve the playing quality of your pitches and outfields
2. Determine which equipment and materials are best suited
3. Determine the quality of your square and outfield
4. Plan future medium and long term maintenance and development programmes
5. Assess and measure the effectiveness of inputs
6. Enable adjustments to maintenance and management regimes

Having weathered Mother Nature through the winter, bulk density of the square may have been reduced. If autumn renovation work was carried out, then some form of aeration or decompaction may have been introduced. This will also reduce soil density. If no pre-season rolling is performed, the soil will increase in density slowly dur 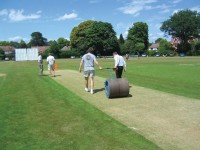 ing its drying process. Early pre-season rolling and consolidation of the surface will help reduce irrigation of the soil from rainfall, enabling a quicker natural recovery of soil density as it dries. There is no such thing as 'no need for pre- season rolling'.

Preparing a square for the start of any season, from an experienced point of view, is subjective. Rolling the square at the right time is just one key to success - finding the right balance is the deciding factor.

It has been proven that rolling for too long wears the life out of the turf. The old school of thought was to roll, roll and roll some more. This theory often produced flat, dead pitches with no pace or bounce. Cranfield University's Guidelines for Rolling in Cricket has shown that this is not the case.

Pre-season rolling plays a major part in the successful process of cricket pitch preparation. It can improve the performance by consolidating the soils, reducing live coverage and producing a smoother uniformed surface.

What weight roller should be used?

This is a very difficult question to answer, as the weight should be sufficient to consolidate the surface to about 100mm, dependent on the soil profile. When assessing which roller, it is necessary to relate the width and the diameter to the weight. An 18in diameter roller, with a width of 24in, weighing 5cwt can have a heavier rolling weight per square inch than that of a so called heavy roller.

If choosing between these two rollers, one would probably opt for the larger model, but nothing would be gained in actual pressure in any given area of the ground. The wider roller might minimise ridging and do the job quicker, but the moral to all this is 'bigger is not always better' or 'the heaviest roller is not always the most effective'.

Start your pre-season rolling in March or early April, when ground conditions are receptive, open and there's no evidence of frost. Ideal rolling conditions would suggest the soil be in a state of plasticity, or 'plasticine' like.

The square needs to be in a condition where the surface is dry but, when you press down with your thumb, some moisture is felt on the skin. This is a good indicator of when to start your rolling. Consolidation is your aim, and the quality of pre-season rolling will show when you produce your early season pitches. This can only be achieved with gradual build up of roller weight and a constant speed over the whole square.

Starting with a light roller, a pedestrian mower about 500kg with the blades raised, would be sufficient. Using the "Union Jack" pattern, roll the whole square, finishing with the line of play, remembering to return down the same line each time. We do not want to create a nap or stripes. This may take a couple of days depending on the size of your square, roller and conditions.

Rolling of the square must be done carefully so as to leave no ridges and to produce a smooth true surface. The amount of rolling on the first few days will be dependent on weather and moisture held in the soil. Allow a couple of days for the square to breathe between repeating each operation, i.e. corner to corner, across and in line with play. This should be enough to consolidate your table and reach rolling potential. 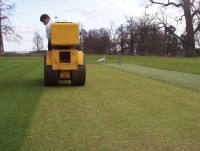 Resist the temptation to continue rolling if severe creasing is in evidence (compressing of the surface or waves appear under the roller) as conditions may be too wet! Sarrel roll the square after a couple of rolls to relieve surface compaction to allow air to the root system.

Following completion of your Union Jack, gradually increasing the weight of the roller to 1000kg by ballasting, roll across the square, up and down the same line, moving partially across each time. Aerate regularly during rolling, at least once a week. You may need to mow the square as temperatures rise. This is normal, but don't cut too short.

Further consolidation of the square should follow by moving up to the heavy roller (1700-2000kg). Follow the same principles, as with the 1000kg roller, allowing for drying time after each operation, which may be only one day.

Proceed to roll the square, finishing in the line of play, to bring it up to maximum potential for the start of your season's 'first pitch' preparation programme.

The availability of roll-on roll-off covers will aid the rolling process during pitch preparation by retaining moisture in the soils.