Over 200 cricket groundsmen made their way to Dennis and SISIS' cricket seminar hosted by St Albans School Trust where they refreshed their education on a variety of topics. 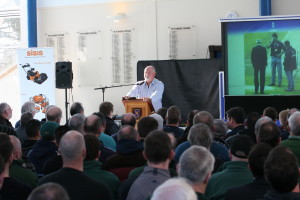 The seminar, which was supported by other key companies in the groundscare industry such as local dealer for Dennis and SISIS - RT Machinery along with Boughton Loam, CricketWorld.com, Ecosol, Harrod UK, Headland Amenity Products, Limagrain and Poweroll, proved to be an overwhelming success after an impressive line-up of speakers delivered insightful presentations relevant to those working in the industry.

The event - which was over-subscribed; brought together cricket groundsmen representing grass roots, schools, local clubs and international test venues. It was a great chance to meet other like-minded individuals, share and gain knowledge, learn best practises and ultimately enhance their education.

Following an introduction by Dennis and SISIS area sales manager Robert Jack; Ian Smith, pitches consultant for St Albans School Trust, kick-started the presentations by focusing on end of season renovations; which gave delegates a fabulous insight into the kind of work that is required in renovating a cricket pitch of St Albans School's stature.

Ian Wall, grounds manager for the Bank of England Sports and Social Club, then delivered his presentation on using a cricket pitch for winter sports before Chris Wood, pitch consultant for the ECB, gave an insight into international pitch inspection and even brought with him some of the tools he uses.

Legendary England cricketer, Mike Gatting, who now works with the ECB, took a walk down memory lane speaking about life in the top tier of cricket as well as relaying some rather amusing stories about his ex-team mates. He then addressed the problem of losing 7% of the cricket population in the last couple of years, partly due to the fact that a lot of games are being cancelled or conceded very early. In order to solve this problem, Mike opened the floor to find out what groundsmen required from the ECB in order to help them.

"It was nice to see so many people here wanting to understand a bit more about their art. My job today was really to talk to them about and thank them for all the work they do but also to try and implore them to help us with a new grounds scheme we are launching at the ECB. I hope I have planted the seed in a lot of groundsmen about getting the game on," he said.

Following a networking lunch, the Institute of Groundsmanship's Andy Clarke, offered some very helpful tips in his early spring cricket pitch maintenance on a budget presentation. Vic Demain, who has been recently appointed as head groundsman at Durham County Cricket Club, was next on stage to deliver his search for the ultimate cricket wicket while also sharing some of his experiences of his time at Trent Bridge.

Vic was a guest speaker at the first ever Dennis & SISIS cricket seminar four years ago and spoke about his journey in becoming the head groundsman at one the country's test match venues. He also concluded with a selection of great photographs in an interactive 'what's the pitch going to do' - which received a great response from the audience.

Commenting on the successful seminar, Chris Wood, said: "It's been a very satisfying day and the feedback has been excellent. If you come to these seminars you might pick up that one tip that can vastly improve your job performance.

"From an ECB point of view, one of our sayings is 'from the playground to the test arena' and I think this seminar has clearly covered that."

Ian Smith was also pleased that the seminar catered for groundsmen at all levels: "Just listening to other people's views has been brilliant. I'm sure that the audience would have got all sorts of things out of this, from the little village groundsmen that probably haven't had any experience at all to the groundsmen facing the trials and tribulations of the county circuit."

No stranger to the county circuit is Stuart Kerrison, head groundsman at Essex County Cricket Club, who as a member of the audience, found the seminar extremely informative.

"I've heard some really interesting talks today. It's also been a great way to network. In this business we get very little chance to all meet together. I would say that if you didn't come to this seminar today then you've missed out."