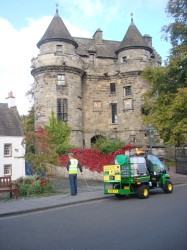 Run by volunteers in Fife, the registered charity Falkland in Bloom won the coveted title of RHS Britain in Bloom champion of champions for the second year running, the first time this had been achieved in the history of the competition.

FIB has been equally successful in other national and international campaigns, also gaining a gold award in the prestigious European championship Entente Florale. In recognition of the overall contribution that FIB has made to the local community, Fife Council presented the charity with the HPX Gator, which is now effectively on permanent loan from the local authority's fleet.

The vehicle has been converted to carry a tried and tested watering system complete with a 400-litre bowser, hosepipe and spray lance. This is used for daily watering of 110 hanging baskets around the village, as well as numerous tubs, floral carts and other displays.

Because of the vehicle's standard left hand drive, it has also been modified by the original supplying dealer Double A Trading of Cupar with a special rear platform that enables a passenger to avoid having to exit the cab into traffic. The waterer can ride inside a cage attached to the rear of the Gator, and reach 90 per cent of the baskets and floral displays with the lance without having to leave the vehicle. A simple audible wireless system allows the waterer to signal to the driver when to move on.

Both the cage and the watering system can be easily removed at the end of the season to allow the Gator to be used conventionally for general transport and materials handling duties.

"We have been very pleased with the Gator in its modified form, and owe our thanks to the staff at Double A Trading for their interpretation of our needs, and the service they have given us over the past year, as well to Fife Council for their support," says John Smith of Falkland in Bloom.

"Falkland was Scotland's first conservation village and is already an incredibly beautiful place, but Falkland in Bloom really adds some extra colour to the village. This is down to the hard work of our volunteers, and the way the whole community gets behind our efforts."