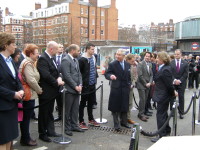 His Royal Highness the Prince of Wales presented awards to aspiring young student garden designers at the opening day of the Ideal Home Show, (11th March) at London's Earls Court.
The Prince, who was on a royal visit to this year's Ideal Home Show, joined garden designers and Ideal Home Show Ambassadors Diarmuid Gavin and David Domoney to present the inaugural 'Young Garden Designers of the Year' Award.
The competition, which is the brain child of David Domoney and was launched earlier this year invited six colleges from around the UK to enter into the first annual Ideal Home Show 'Young Gardeners of the Year' competition, in association with the Prince's Foundation for the Built environment.
The winning college accepting their Gold award from His Royal Highness the Prince of Wales was Capel Manor with their 'Box Clever' concept garden.
Built from eco-friendly and sustainable materials, it provides the gardener with a versatile outdoor haven from city life. Using a cellular storage system all the elements are interchangeable, from bird boxes to a wormery.
The planting is mainly evergreen, selected to provide year round interest and to promote biodiversity. Layered planting also provides a range of wildlife habitats, with flowering plants as a nectar source for insects and a green feature wall to add vertical interest.
A reflective water feature creates a tranquil ambience and provides another essential wildlife habitat.
In second place with The Silver Award was Bridgwater for their Lily Pad garden, a modern water garden, which takes its design theme from the Water Lily, with a lily pad design forming the main feature of the garden. The Pad is a small, outdoor garden room, which in reality, would be within the environment of a larger garden. The South East facing aspect of the garden provides a good level of direct sunlight for the water feature in the mornings with some respite for the rest of the day. The aspect therefore offers versatility in planting by allowing the use of plants like hostas and ferns that prefer limited direct sunlight. Further shade for both the planting and those enjoying the garden is provided by the lily-pad shaped shade sail, which is positioned over the main decking feature.
The Bronze Award went to Writtle College's, student living inspired 'LNP' Last Night's Pizza garden. Writtle created a garden of which many of us could only dream of having in this busy and hectic time in society. The seating consists of chill out lounging beanbags with low maintenance planting to give structure and interest through most of the year.
Parts of the garden have been constructed from recycled materials from last year's Chelsea Flower Show. The fence design has been developed to make the space feel interesting and to make a feature of the horizontal lines. These lines contrast well with the vertical timbers around the Bar area and make the space feel larger than it is.
Timbers used in the Pizza oven are from a sustainable woodland policy run on the grounds of Writtle College.
The remaining designs - Askham Bryan's ''Geometric to Natural'' garden, Chichester College's ''A Touch of Grass'', and Shuttleworth's 'Biodiversity Garden' all received an Award of Merit.
David Domoney, competition founder commented: "I am delighted to be able to bring Britain's crop of new garden talent to the fore for the very first time. This is an exciting opportunity for young designers and landscapers to launch their careers, and I believe we are showcasing the new talent of our future."
"This year's entrants are fabulous," he continued "and have created an outdoor garden spectacle at the Ideal Home Show for the very first time in its history.
The aim of the competition was to support emerging talent by highlighting the very best examples of sustainable practice in British garden design amongst student designers, whilst offering them a taste of what it is like to work in the industry. "
Each garden was judged at the show on the opening day Friday 11th March, by an esteemed panel of judges which included; the Ideal Home Show's Celebrity Ambassador and TV presenter Diarmuid Gavin, award winning garden designer Adam Hunt, who created the edible garden for HRH the Prince of Wales's START festival at Clarence house in the summer 2010 as well as Urban designer Michael Romero of the Prince's Foundation.